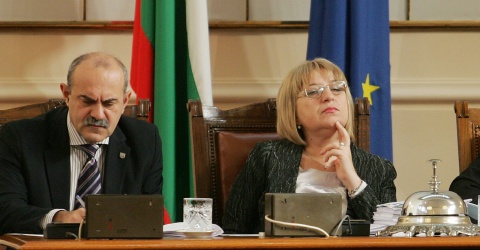 Bulgarian Parliament Chair Tsetska Tsacheva believes that Thrusday's vote of confidence of the Borisov Cabinet must end the "wars of discrediting", which have led to "Tapegate", the recent scandal with leaked conversations of senior officials.

"The result of the vote is clear. I expect the MPs and parties to demonstrate their positions. Let's end once and for all the wars of discrediting. Let's provide publicity on the parliamentary floor. Today is a day of dispelling all dependences and fears instilled in the Bulgarian society," Tsacheva said on Nova TV shortly before the Parliament kicked off the confidence vote debate.

She commented on the statement of the Sofia Prosecutor's Office that the discrediting tapes of telephone conversations of senior officials may have been manipulated by saying that while the evidence of manipulations might be inconclusive, the major conclusion is that the tapes were re-taped, and are not original.

Tsacheva slammed the marginal conservative party RZS, which, together with the Galeria weekly, has been the source of the leaked tapes, with respect to violations the party allegedly committed when collecting signatures for a referendum for a new constitution. Last week an investigation of the State National Security Agency DANS found that a number of the people supporting the initiative have never signed the petition meaning that their ID information was stolen.