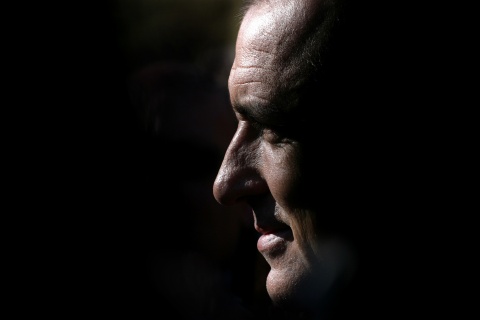 Bulgarian PM Borisov has himself initiated a vote of confidence for his Cabinet. Photo by BGNES

Bulgaria's Cabinet of PM Borisov and the GERB party is facing Thursday a vote of confidence that it requested from Parliament in the aftermath of "Tapegate", a scandal resulting from leaked discrediting conversations of senior officials.

The tapes were leaked in the past couple of weeks by the Galeria weekly, a newspaper believed to be close to former secret agent Aleksei Petrov, who is currently under investigation for organized crime and in house arrest, and by the marginal conservative party RZS.

The tapes, which are conversations of Customs Agency head Vanyo Tanov with Prime Minister Borisov, Finance Minister Simeon Djankov, Deputy Finance Minister Vladislav Goranov, ex customs deputy director Antoniy Straldzhev, and MPs Medna Stoyanova and Iskra Fidosova, contain alleged evidence of political cover-ups for companies such as Lukoil, Billa, and the Ledenika brewery as well as of pressure for certain appointments in the customs and a rift between the two deputy prime ministers Djankov and Tsvetanov.

Late Wednesday night, a statement of the Prosecutor's Office announced that forensic experts have concluded there is evidence the tapes presented by the Galeria weekly may have been manipulated.

Meanwhile, the Parliamentary Committee for control of special survellance devices announced that Customs Agency head Tanov's phones were tapped legally as part of a past investigation of contraband in the customs. The government's investigation of "Tapegate" continues to be under way - with respect to seeking to establish a leak of classified information, i.e. the tapes, and to whether the tapes were forged or manipulated.

PM Borisov has demanded a vote of confidence for "the overall policies" of his Cabinet as a "preemptive strike" since the opposition in the face of the Bulgarian Socialist Party and the ethnic Turkish party DPS (Movement for Rights and Freedoms) were planning to initiate a no confidence vote.

He has explicitly declared that the discrediting tapes were part of a war against his Cabinet by "a gang of bandits" referring to all those, whose interests were affected by his rule. He has further declared that he is ready for early elections and that he will not allow other factors to make his party "dependent".

The vote of confidence, scheduled for Thursday after respective parliamentary debates, is expected to be positive for Borisov as his party GERB with its 117 MPs, out of a total of 240 MPs, and the nationalist party Ataka with 20 MPs will back his rule. Ataka has been in a de facto informal coalition with GERB, and its leader Volen Siderov has declared there will "no backstabbing" during the vote.

The right-wing Blue Coalition, with its 14 MPs, which has been an uneasy and highly critical ally of GERB in spite of the prodding of the European People's Party (to which both entities belong), will most likely abstain during the vote of confidence as its MPs do not wish to vote the same way as the BSP and DPS, who declared they will vote against.

The other major difference between a vote of confidence and a no confidence vote is that in the first case, if the Prime Minister fails to get support, he has to resign; in such a scenario in the second case, he or she can come up with a new Cabinet.