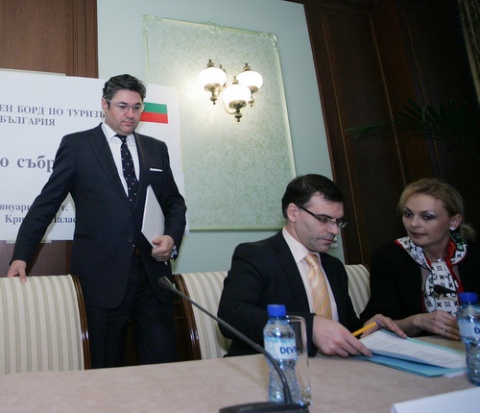 Finance Minister Djankov (middle) at a conference of the National Tourism Board; businessman and advertising concultant Krassimir Guergov is on the left. Photo by BGNES

Bulgaria's Finance Minister Simeon Djankov has urged anew an emphasis on cultural and historical tourism, and a program to boost the Bulgarian pilgrimage sites.

Djankov took part Wednesday in a conference of the National Tourism Board, during which he encouraged the tourism sector to attract wealthier foreign tourists by focusing on cultural and historical sites, golf, and mountain tourism. He also said Bulgaria should not put efforts into developing its historical attractions from the medieval period.

"A lot has been done already about the projects related with Ancient Thrace, much more than about the Bulgarian medieval projects. From this point of view, we would like to focus on a few projects related with the First Bulgarian Empire in the early Middle Ages, especially in Northeastern Bulgaria where the first two Bulgarian capitals Pliska and Preslav are located. The capital of the Second Bulgarian Empire Veliko Tarnovo also has a lot of opportunities for development," Djankov declared vowing to invest public money in the development of the archaeological infrastructure of these sites and regions.

He also promised investments in tourism infrastructure in the northwestern city of Vidin, and said that the rehabilitated church in the Black Sea town of Sozopol, which will host the relics of St. John the Baptist discovered there in the summer of 2010.