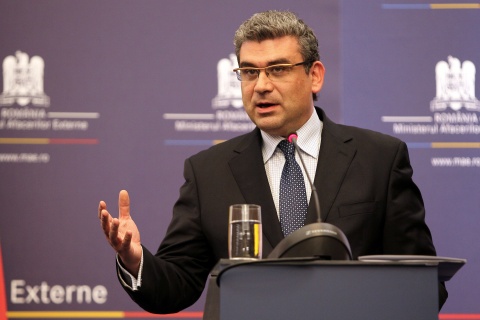 Romanian Foreign Minister Teodor Baconschi has slammed once again France and Germany for their opposition to his country's Schengen accession. Photo by BGNES

Romanian Foreign Minister Teodor Baconschi has declared his country insists on a decision about its Schengen accession during the Hungarian EU Presidency in the first half of 2010.

"Our main goal is to see a decision on Schengen accession during Hungary's presidency of the European Union. We have done our homework and the seven assessment missions have confirmed that Romania is ready," Baconschi told journalists as cited by BGNES.

His statement came after on Friday, experts from the Brussels working group on Bulgaria and Romania's Schengen accession concluded that both countries – but especially Bulgaria – have not met yet the technical requirements to join the borderless Schengen Area.

The report has come on top of criticism and opposition by major EU powers such as France, Germany, Austria, Sweden, the Netherlands, to Bulgaria and Romania's Schengen accession, which was originally expected to take place in March 2011.

In the recent weeks, Baconschi has been especially critical of Bulgaria, stating time and again that Bulgaria has been dragging Romania down with respect to border control and Schengen progress. The two countries cannot be decoupled because if one of them is left out the EU will have to invest additional funds into securing their common border, which would otherwise become an internal Schengen border.

Speaking on Wednesday, Baconschi declared Romania was determined to boost its Schengen accession efforts. He slammed France and Germany for their "false arguments and artificial links" that they used in order to block Romania's accession.

"We have had to meet very strict technical criteria ... and have spent more than a billion euros to tighten border controls. We would like to see Europe play by the rules and not apply double standards to newcomers. The risk exists that Romanians become more eurosceptical," he warned.

The Schengen zone of 25 member states and more than 400 million people currently allows free movement without border controls from Finland to Greece and from Portugal to Poland.