Bulgaria to Honor Victims of Communism at Ex Presidents' Initiative 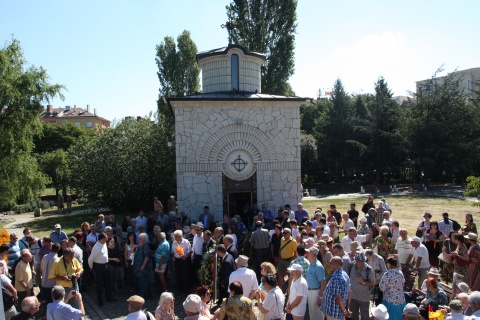 Pictured: a remembrance of the victims of totalitarianism on August 23, 2010, in Sofia. Photo by BGNES

Bulgaria's Cabinet has declared February 1 as a Day of Recognition and Honoring of the victims of the communist regime in the country (1944-1989).

The government press service states that February 1, 1945, was the first day of executions of senior Bulgarian politicians, including the regents, by the so called People's Court formed by the Fatherland Front, an umbrella group of leftist parties which committed a pro-Soviet coup on September 9, 1944, as the Soviet Army was advancing into Bulgaria. By 1947, the Bulgarian Communist Party had fully taken control by the Fatherland Front from within.

The People's Court was supposed to try those responsible for Bulgaria's alliance with Nazi Germany in World War II but its verdicts were also directed against the Bulgarian bourgeois elite at the time.

"This day remains crucial in our history because it sets the beginning of the bloody repressions against the Bulgarian people," states the announcement of the Bulgarian Cabinet.

The decision was made in response to the initiative of Bulgaria's former two Presidents – Zhelyu Zhelev (1990-1997), Bulgaria's first democratically elected president, and Petar Stoyanov (1997-2002), who was Zhelev's successor. Zhelev and Stoyanov sent a letter to the Bulgarian Prime Minister Boyko Borisov requesting that the government should take into account their initiative.

Both Zhelev and Stoyanov came from the ranks of the UDF – Union of Democratic Forces – the emblematic rightist and pro-Western party in Bulgaria in the 1990s, which split up in 2003, and its current successors are the parties from the Blue Coalition – UDF and DSB

"The day of honoring the memory of the victims will also give us a cornerstone for the more correct understanding of the events from the recent past, without which it is impossible to move in the direction of a free, democratic, and honorable European country," Zhelev and Stoyanov declare in their open letter to Borisov.

"In the months after February 1, 1945, thousands of honorable Bulgarians share the fate of the victims of People's Court – agrarians, social-democrats, representatives of all democratic Bulgarian parties, and anti-communist movements, peasants, and craftsmen, whose only fault was that they opposed the Sovietization of Bulgaria. The Bulgarian nation was beheaded, setting the beginning of the communist dictatorship. Regardless of these bloody repressions, through the fight of mountain guerrillas Bulgaria became the first country in the Soviet Bloc, which saw armed resistance to the advancing communist dictatorship," the former presidents say in their letter.

In 2010, on September 9, which marks the Soviet-inspired coup in Bulgaria, the rightist and leftist parties issued a declaration and a counter-declaration, each of them seeing the events from September 9, 1944, differently.