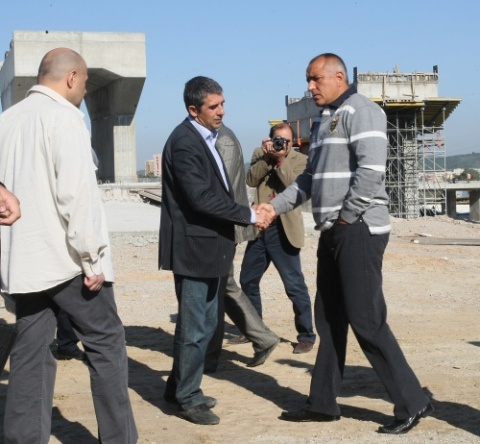 Prime Minister, Boyko Borisov, and Regional Minister, Rosen Plevneliev (L), at the official opening of the Daskalovo road junction, near Sofia. Borisov has vowed to remain in history as the leader who has built the country's roads. Photo by BGNES

The test checked the quality of construction works and the level of readiness of the road to be open for use.

Borisov and Plevneliev were accompanied by Karsten Rasmussen, Deputy Head of the "Bulgaria" Department with the "Regional Policy" Directorate at the European Commission.

The check includes all 19 kilometers of the highway from the Sofia beltway to the Daskalovo road junction.

94% of the highway is completed and just needs finishing touches such as signs, fences, and road markings, Plevneliev, who already inspected the road, informs.

"Mr. Rasmussen, I hope we can also complete the Hemus highway to the city of Varna," Borisov said.

The Lyulin highway is expected to be open from the city of Pernik to Sofia by March 15. It will be fully completed by May 15, 2011.

Borisov announced earlier the road will be open for use between January 10 and 15, 2011. Experts from the Road Infrastructure Agency extended the deadline to make sure the highway corresponds to all safety requirements.

The construction was pushed last year, after the EC threatened that Bulgaria will lose the ISPA program funding.

The project cost was first estimated at EUR 148.4, which includes EUR 111.3 funded by ISPA. In 2010, the cabinet gave an additional EUR 43 M, after the Turkish contactor, Mapa Ghengiz, asked for compensations for the delay, caused by the State over infrastructure technology and expropriation of private lands.

During one of his visits of the road, Borisov said Turkish companies will no longer be allowed to do construction works in Bulgaria if Mapa Ghengiz fails to adhere to the deadlines.