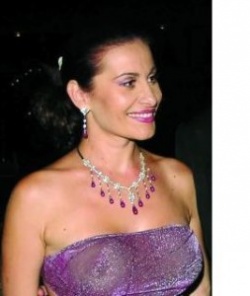 Darina Pavlova, a former Bulgarian model, has been tipped to be Berlusconi's long-term partner. File photo

Berlusconi, 74, stated last weekend he was in a "stable intimate relationship with a woman", thus hitting back at the allegations of using underage prostitutes. Subsequently, Italian pundits have named several allegations about who the mysterious woman in the Italian Prime Minister's life is.

According to the Italian "Free Press Lego", the Bulgarian Darina Pavlova is the lady in question.

Pavlova is the widow of Iliya Pavlov, a businessman murdered in a gangland hit in the murky times after the fall of Communism. She has been a regular guest of the Italian Prime Minister and their friendship has been by the Italian and Bulgarian public for years.

Speaking to the former Bulgarian PM Sergei Stanishev back in 2009 , Berlusconi joked: "The truth is Darina Pavlova has a fantastic daughter - and you know my interest in minors."

Meanwhile, Italian opposition parties stepped up calls on Tuesday for Prime Minister Silvio Berlusconi to resign over a probe into allegations he paid for sex with several young women, including a 17-year old nightclub dancer.