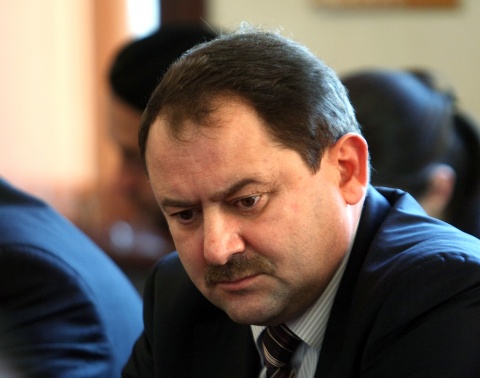 Veselin Pengezov has been removed from the position of head of the Sofia Appellate Court for ruining the image of the judiciary. Photo by BGNES

Bulgaria's Supreme Judicial Council has voted to remove Veselin Pengezov from the position of chair of the Sofia Appellate Court because of the revelations made in the summer of 2010 which tangled Pengezov's family in a property scandal.

The Supreme Judicial Court (VSS) voted 15 to 4, with 3 abstaining, to remove Pengezov from the head position of the Sofia Appellate Court; the discredited magistrate, however, will still remain on staff as a regular judge. The VSS decision can be appealed.

Pengezov was removed because of the scandal, which involved transferring the ownership of beach-front property in Bulgarian Black Sea resort Primorsko to his daughter, Ana Pengezova, who is also a magistrate.

The VSS has cited as the only motive for his removal the fact that the scandal has damaged the image of the Bulgarian judiciary.

Pengezov is the first magistrate out to be punished over the Primorsko property scandal out of a total of five magistrates, whose relatives and family members received construction rights in Primorsko on municipal lands claiming the status of people on social benefits who need homes.

Pengezov’s daughter is actually the only one of the five relatives of senior magistrates who has not constructed any buildings yet on the beach-front property that she got. In July 2010, she formally waived her construction rights as the scandal erupted and drew immense public criticism against the judiciary.

In the spring of 2010, it was revealed that three senior judges from Bulgaria’s Supreme Administrative Court helped close relatives to obtain building rights for beach-front lots in Primorsko thanks to their acquired status of people on social benefits.

This has lead to the three judges being expelled from the Supreme Administrative Court. It was later revealed that the number of people on purported “social benefits”, who have similarly received rights to build properties in Primorsko, was up to 400.

Before the Primorsko property scandal, Judge Veselin Pengezov was tangled in another scandal. An investigation against former Defense Minister Nikolay Tsonev, judge Petar Santirov, and former Finance Ministry official Tencho Popov on bribe and corruption charges was conducted with special surveillance devices authorized by a appellate judge from outside Sofia because the Interior Ministry did not approach Pengezov, the person in charge in Sofia, as it could was afraid he could not be trusted with the secret operation.

Pengezov took over the Sofia Appellate Court in June 2009, after opposition on part of the other judges in the court. Before that, Pengezov was the head of the Military Prosecutor's Office, and is known to have been in conflict with former Chief Prosecutor Nikola Filchev (who was in charge in 1999-2006).

One of the detainees in special police operation “Octopus” in February 2010, Nikolay Velkov commented that Pengezov “is a big player”. After an inspection, in May 2010, the VSS cleared Pengezov of suspicions of ties with the detainees in Operation Octopus, which include former secter agent Aleksei Petrov.

The VSS has started disciplinary procedures against the other four magistrates, whose relatives received construction rights in Primorsko. These are judges Panayot Genkov, Nikolay Urumov and Andrey Ikonomov from the Supreme Administrative Court, and magistrate Yordan Ivanov.

Pengezov is the highest-ranking magistrate in Bulgaria to be removed from office over violations.

The entire 2010 saw a war of accusations between Bulgaria's Interior Minister and the judiciary, with the magistrates accusing the police of transgressing civil rights and rule of law in their special operations and failing to collect proper evidence, while the Interior slammed the judiciary for its failure to reform and its corruption, a conclusion confirmed by US and EU reports.