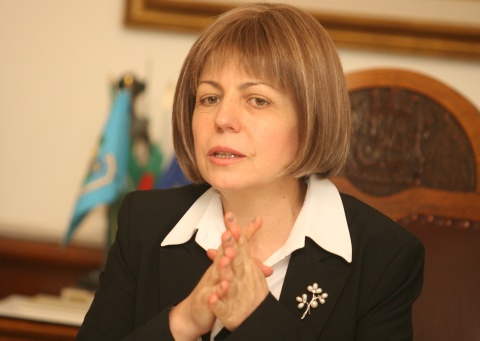 Yordanka Fandakova, mayor of Sofia, has stated that the city is expecting help and support from Italy on its candidature for European Capital of Culture. Photo by BGNES

We are expecting help from Italy for the candidature of Sofia as European Capital of Culture in 2019, the mayor of the Bulgarian capital, Yordanka Fandakova, has announced.

"Italy will help Sofia for its candidature for European Capital of Culture in 2019," Fandakova said Monday for the Bulgarian News Agency.

She pointed out that the city has officially submitted its candidature and added that by 2019, Sofia will have completed several culture projects that had been started, like the Central mineral bath and the necropolis under the Hagia Sophia Church.

Fandakova also stated that the Italian Ambassador to Bulgaria, Stefano Benazzo, has confirmed his support and cooperation for contacting the Italian cities, which are candidates for European Capital of Culture in 2019.

"Besides, we received support by Bologna and Genoa, which have already had the title European Capital of Culture. Also, we negotiated with the Italian Ambassador the first event that will be held in the spring at the building of the Central bath – an exhibition of copies of mosaics from the Italian city of Ravenna," Fandakova said.

The Sofia Municipality, in cooperation with the National Art Gallery, has organized an exhibition of Bulgarian embroideries, which will be presented in Ravenna.

Bulgaria, together with Italy, have already been chosen to share a European Capital of Culture title in 2019. The exact cities, however, will be determined in 2014.

Besides the capital Sofia, Varna, Ruse, Plovdiv and Burgas have already launched their bids.

The Finnish city of Turku and Estonia's capital Tallinn will be the European capitals of culture in 2011, titles to be handed over by the German city of Essen, Hungarian Pecs and Istanbul.

The European Capital of Culture is a city designated by the European Union for a period of one calendar year during which it organizes a series of cultural events with a strong European dimension.More than 40 cities have been designated the presigious title so far.

Preparing a European Capital of Culture can be an opportunity for the city to generate considerable cultural, social and economic benefits and it can help foster urban regeneration, change the city's image and raise its visibility and profile on an international scale.