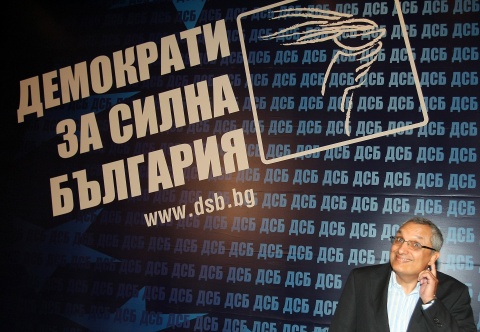 The leader of the right-wing Democrats for Strong Bulgaria (DSB) party, Ivan Kostov, wants all people from the Communist secret services to be immediately dismissed from leadership positions in the country. Photo by BGNES

The right-wing leader stated the only solution standing before Prime Minister, Boyko Borisov, is to get rid of those who failed to oppose DS' invasion of the country – Interior Minister, Tsvetan Tsvetanov, and the Director of the Customs Agency, Vanyo Tanov.

According to Kostov, Borisov must launch a true war against people from DS and immediately dismiss them from all leadership positions in the country, adding the former agents and collaborators of the Communist secret services not only want to tumble the cabinet, but have a long-term goal – reinstating Russian influence in the country.

Kostov further hinted of involvement of President, Georgi Parvanov, in the spying scandal raging in the country.

If the opposition Bulgarian Socialist Party (BSP) fulfills their threats of staging a no-confidence vote against the cabinet, DSB will call a national party meeting to decide if they will support the move, the right-wing leader stated.

The scandal was triggered last week by the release of tapes of conversations between the Prime Minister and the Director of the Customs Agency, Vanyo Tanov.

The tapes were published Friday by the Galeria weekly, a paper believed to be the mouthpiece of the former special agent of the State Agency for National Security, DANS, (currently under house arrest), has been investigated on organized crime charges since his detention in the much advertised "Operation Octopus" in February 2010.