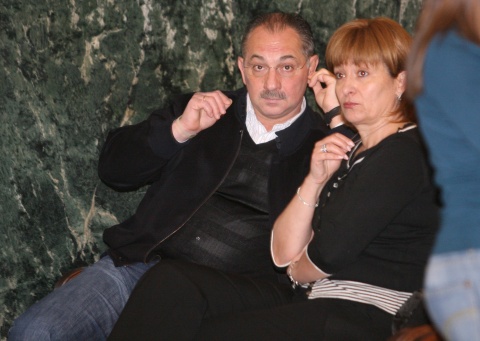 Businessman, Angel Bonchev (l) and his wife Kameliya (r), who are part of the victims of the kidnap gang "The Impudent," are seen in Court Monday where they were supposed to testify in the case. Photo by BGNES

The Sofia City Court postponed Monday, for several hours, the new session in the high-profile kidnapping case codenamed "The Impudent."

The magistrates were scheduled to hear more of the victims of the "Impudent" kidnappers gang, which is deemed responsible for at least 13 high-profile abductions in Bulgaria in 2008-2009.

The latest delay came after it was found out a lawyer for one of the defendants failed to appear in the courtroom.

The judge ruled she could not continue with the case in the absence of defense council, and gave a 12-hour recess, during which attempts will be made to get in touch with the attorney.

An aide of the said attorney informed his boss called the law offices Sunday and said he was sick. However, he had not provided explanations for his absence to the Court and never notified the judge.

The case against "The Impudent" started at the end of 2010 with victims revealing horrifying details from their ordeals.

Ivaylo Evtimov and Prokopi Prokopiev were charged with racket and with organizing a kidnap gang. Daniel Dimitrov, Lyubomir Dimitrov, brothers Radoslav and Mitko Lebeshevski, Pavel Petkov, Kiril Kirilov, and Tsvetozar Slavchev, were all charged as accessory to the abductions.