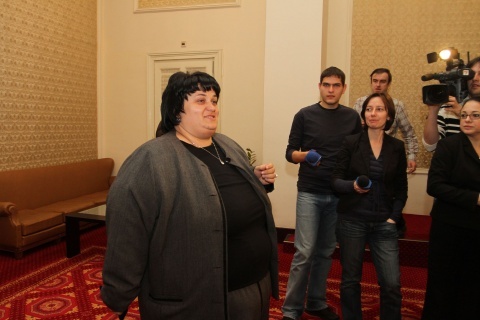 MP Iskra Fidosova (middle) has denied trying to influence the appointment of a head of the Lom customs. Photo by BGNES

The co-Chair of the parliamentary group of Bulgaria's ruling Citizens for European Development of Bulgaria (GERB) party, Iskra Fidosova, declared she was not confirming the content of her taped phone conversation with the Customs Director, Vanyo Tanov.

The tapes were disclosed by the conservative Order, Law and Justice (RZS) a week ago. They reveal how two key MPs from GERB, allegedely, pressured Tanov to appoint certain individuals to head local customs offices.

The next day, Tanov said the tapes had been forged by putting together pieces of actual telephone conversations he had with Fidosova and Menda Stoyanova, who is the Chair of the Parliamentary Committee on Budget and State Finances. However, speaking on the Bulgarian National TV that same day, Tanov admitted GERB party members have tried to influence him for certain appointments by lobbying.

Speaking for the first time on Wednesday, both Fidosova and Stoyanova admitted to having had numerous and constant phone conversations with Tanov over their work, but also said the tapes were forged, and denied accusations of trying to influence Tanov.

The Parliamentary Committee on Special Surveillance Devices decided to start an investigation into the tapes and whether the conversations were tapped legally.

Fidosova said she did not feel guilty for talking to Tanov and asking him about how a certain candidate performed at an exam for the position of heading the Customs office in the Danube town of Lom. She said she did not know the person in question.

On Monday, Fidosova told bTV entire passages were missing from the said conversation while there were words from other conversations mounted in this particular one, reiterating she had numerous talks with Tanov, but never pressured him to appoint anyone at the Lom Customs.

The GERB MP was adamant the conversation has been manipulated. She also explained she called Tanov to inquire about the results from the competition for Lom Customs head, after the procedure has concluded and the scores were a fact. The reason behind the inquiry had been information, received by citizens, alarming about corruption practices of the person employed as Lom Customs head.

Meanwhile, the individual Fidosova inquired about also firmly denied he knew her or that she had promised him to intercede, adding he felt disgusted by the entire affair.

The man has been identified as Antoan Rafailov with a 15-year-career at the Lom Customs, currently working for its "Excise Duty" department. He has no known affiliations with the GERB party.

"The main issue here is who and why is publishing and spreading this tapes and what are this person's goals. Everything I heart in this conversation is montage while half of it is silenced. There is lots of noise. We did not commit any violation," Fidosova stated.