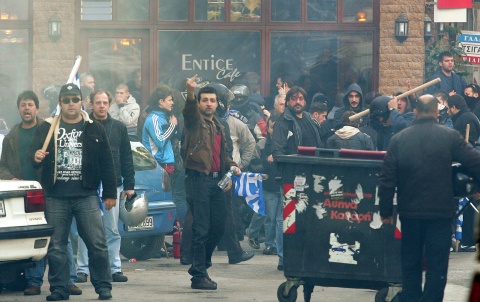 Nationalists and residents of the district of Aghios Panteleimonas, a mainly immigrant neighbourhood, near central Athens, clash with riot police while trying to stop an anti-racism rally being organized by labor, student and immigrants, Jan 15. EPA/BGNES

The Greek police has clashed with extremists from a rally countering a pro-immigration rally protesting Greece's plans to build a fence wall along its border with Turkey to fend of illegal immigrants.

The police have managed to prevent the two rallies from coming into contact but at the price of clashing with far-right demonstrators from the counter rally of several hundred people, many from far-right group Chrysi Avgi (Golden Dawn), hurling stones at the officers.

The anti-racism and pro-immigration rally consisted of about 1000 immigrants, unionists, and human rights activists.

Both rallies were eventually dispersed even though the police chased away some of the extremists with tear gas.

In December, Greece announced plans to build a fence along at least a section of its border with Turkey, which in 2010 proved to be the major entry point of illegal immigrants into the EU.