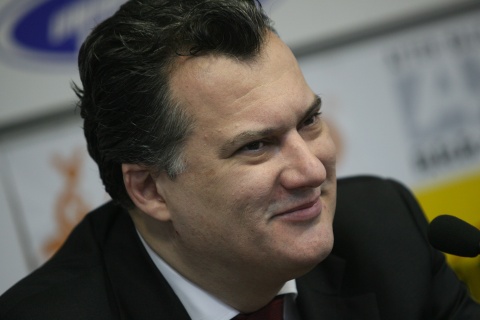 Mihov spoke Friday in a special press conference and told reporters the legal battles, led by the "Ledenika" beer brewing company, were a stark proof of his words.

The latest scandal erupted after Galeria weekly, a paper believed to be the mouthpiece of Aleksei Petrov, former special agent of the State National Security Agency DANS, (currently under house arrest), who has been investigated on organized crime charges since his detention in the much advertised "Operation Octopus" in February 2010, released tapes of conversations between Prime Minister, Boyko Borisov, and the Director of the Customs Agency, Vanyo Tanov.

The recordings, whose authenticity is yet to be proven, allege Borisov provided a cover-up for the owner of the "Ledenika" beer company, Mihail Mihov.

Mihov confirmed for the media he had approached President, Georgi Parvanov, regarding the revoking of the brewery's license.

In the tapes, Borisov can be heard mentioning Parvanov the following way:

"I am not Parvanov. When I promised to not touch him it means I would not touch him. Call the minister and tell them what I said and then call Misho," Borisov says after Tanov has told him that the Finance Minister has given him other orders.

Mihov said during the press conference that at the time the court saga with "Ledenika" appealing the revocation of its license was going on, he complained to everyone he came across.

The businessman explained he had not been directly managing the company for years now, and currently works only as its consultant.

The "Ledenika" license was revoked by a decision of Tanov in February 2010.

A month later, Mihov was spotted dining at a Sofia restaurant with the Supreme Administrative Court Judge, Panayot Genkov. The same court revoked Tanov's decision in the summer of 2010.

Mikov explained Friday, he met Genkov in connection with the Basketball Federation since the latter had been a member of its Board until one year ago.