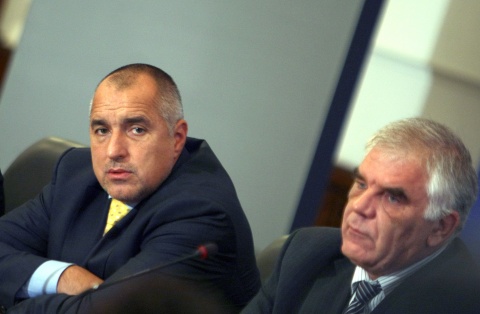 Bulgarian Prime Minister Boyko Borisov (l) and the Head of the Custom's Agency, Vanyo Tanov, have been allegedly involved in providing cover up for a businessman. Photo by BGNES

The tapes were released last week at a news conference, again held by by the Galeria weekly, a paper believed to be the mouthpiece of Aleksei Petrov, former special agent of the State National Security Agency DANS, (currently under house arrest), who has been investigated on organized crime charges since his detention in the much advertised "Operation Octopus" in February 2010.

At a another press conference Friday, the paper released a tape of an alleged conversation between the Prime Minister and the Customs Director.

"I made the commitment to not touch Misho Birata (The Beer),"Borisov can be heart saying, after which it becomes clear the person in question is Mihail Mihov, the owner of the "Ledenika" beer company.

It is believed the conversation dates from March 2010, when a tax probe had been conducted at the "Ledenika" factory.

"I am not Parvanov (the President). When I promised to not touch him it means I would not touch him. Call the minister and tell them what I said and then call Misho," Borisov says after Tanov has told him that the Finance Minister has given him other orders.

The Customs Head also explains several times he is leaving on a business trip to Macedonia and will be away for several days and proposes for the probe reports to not be officially filed until he returns and reaches an agreement with the PM what to undertake further.

Here is the transcript from the Borisov – Tanov conversation.

BB: Hello. This one, Misho Birata, called me again.

VT: I am listening.

BB: Some people have entered his factory, customs agents, tax agents, I don't know... They are confiscating cell phones, are conduction some action...

VT: Well, when we had this conversation in your office, you told me to meet him and reach an agreement. I called him and we started talking. Then Mr. Djankov (the Finance Minister) called me and said: "I am the one driving the engine. Let him come to me.
BB: Yes

VT: And I sent him and no longer... They just called me they have sent a team to check what are they doing inside this factory at night. Some citizen has called to say the factory works without a license. And I called Birata on his cell and told him: "Bottle the beer you have now until we fix things"... he called him and I have no idea what deal they reached.

BB: I saw Djankov and sent him to him so that they strike a deal.

VT: I called the Minister and told him: "Mr. Minister, we had an agreement with the PM about this issue. You talked to this person, tell me what deal you reached at last. He tells me: "I have no deal with him. Told him to take out the beer he still had inside the factory. This is it." So, now, I have no idea what to tell them. I called, but I am leaving tomorrow for Macedonia for a 3-day meeting. And I told them: "People have written; they will not file it; I want them to report directly to me."

BB: OK, take them out of there; we made a commitment.

VT: Yes, but we are working in different directions. I am doing one thing, the Minister another.

BB: No, I called him and told him. So, who sent this group there?

VT: It happened because of a phone call.

BB: OK, you call now; take them out of there; we will talk more in person.

VT: Because he has no license.

BB: Yes, so this must be done ASAP.

VT: This is what I said – the materials on my desk, and to not do anything until I return and make a decision.

BB: OK. If needed, call him right now and tell him what we agreed on, because I made a commitment; I am not Parvanov. When I promised to not touch him, it means I would not touch him.

VT: I will call the Minister right now and tell him.