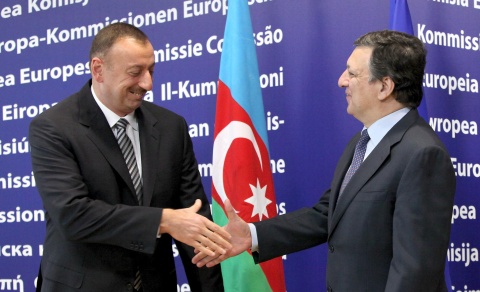 The EU has made a "breakthrough" deal with Azerbaijan on the supply of natural gas to the Union from the Caucasus country and on the development of the so called Southern Gas Corridor with several major pipelines including Nabucco.

The President of the European Commission Jos? Manuel Barroso and the President of Azerbaijan Ilham Aliyev signed Thursday in Baku a Joint Declaration on gas delivery for Europe in Baku.

Under its terms, Azerbaijan for the first time commits in an official written document to supplying substantial volumes of gas over the long term to the European Union, while Europe provides access to its market for them.

The Joint Declaration has been described an important step in the realization of the so called Southern Gas Corridor, the route expected to bring Caspian Sea and Central Asian gas to the EU, and the diversification of Europe's energy supplies.

"This is a major breakthrough. This agreement confirms Europe's direct access to gas from the Caspian basin, thus enabling the realization of the Southern Corridor. This new supply route will enhance the energy security of European consumers and businesses," stated EC President Jose Manuel Barroso, who is on the much-anticipated EC visit to Baku together with EU Commissioner for Energy Guenther Oettinger.

"As gas imports increase in the decades to come, we need new supplier countries, Azerbaijan foremost amongst them, in addition to our established partners," Oettinger is quoted as saying by the EC press service.

The declaration signed in Baku Thursday stipulates that Azerbaijan will provide sufficient gas to enable the creation of the Southern Corridor, while the EU and Azerbaijan together will provide the infrastructure to supply gas to Europe.

The Southern Gas Corridor entails the construction of several pipelines, such as Nabucco (running from Turkey to Austria and Germany via Bulgaria, Romania, and Hungary), ITGI (Interconnection Turkey-Greece-Italy), White Stream (known also as the Georgia-Ukraine-EU pipeline) and TAP (the Trans-Adriatic Pipeline), aiming to bring gas from the Caspian Sea to Europe. The EC points out that Nabucco aims to bring gas to the border of Europe with a brand new pipeline, whereas TAP and ITGI requires the strengthening of existing infrastructure in non-EU countries.

The Commission states that in the next months Azerbaijan will make a further decision on which of these pipelines to prioritize.

“We signed a Joint Declaration on the Establishment of the Southern Gas Corridor, through which the EU will directly receive Azerbaijani gas. Realizing this corridor is in our shared strategic interest. It is vital for the security and diversification of our energy supply and demand. Azerbaijan wants to diversify its exports as much as the EU wants to diversify its imports. The Southern Corridor will give Azerbaijan reliable, physical access to the EU energy market – which is the world's largest. It therefore provides a long-term perspective for its development. In the same vein, we look forward to a swift allocation process for the Shah Deniz II gas field. I hope this will enable us to announce the Azeri-EU deal of the 21st century,” EC President Barroso stated in Baku at a joint news conference with Azerbaijan President Aliyev.

Shah Deniz II is expected to add roughly 16 billion cubic meters natural gas to Azerbaijan’s  production, 10 bcm of which would be ready for export to the EU. BP and Statoil each own 25.5% stakes of Shah Deniz. The State Oil Co. of Azerbaijan, or SOCAR, OAO Lukoil Holdings of Russia, France's Total SA and National Iranian Oil Co. all own 10% each, while Turkey's TPAO owns 9%.

Azerbaijan has thus emerged as the first major natural gas supplier for the EU from the Caspian Sea region, thus providing for lessening the 27-nation bloc’s dependence on gas imports from Russia.

The several pipelines from the Southern Gas Corridor, which provides an untapped natural gas supply route for the EU circumventing Russia, will supplement the existing gas supplies that the Union gets through pipelines from from Russia, Norway and North Africa, most notably Algeria.

The Southern Gas Corridor appears to be especially important for EU countries such as Bulgaria, which get the overwhelming share of their natural gas from Russia. The Russian gas supplies to Europe were disrupted on two occasions in 2006 and 2009 because of disputes between Gazprom and Ukraine, which is a major transit country.

Azerbaijan, together with Iraqi Kurdistan, will be the major initial supplier of natural gas for the Nabucco gas transit pipeline.

After visiting Azerbaijan, President Barroso and Commissioner Oettinger will travel to Turkmenistan to discuss political and energy issues, including Turkmenistan’s potential natural gas supplies for Nabucco.

Meanwhile, the Nabucco consortium, Nabucco Gas Pipeline International GmbH has formally refuted the information on the potential merging of the Nabucco and South Stream projects stemming form a throwaway remark by the US ambassador to Italy, David Thorne.

Nabucco and the Gazprom-sponsored gas transit pipeline have been widely considered rival projects, with EU Energy Commissioner Guenther Oettinger formally admitting in November 2010, the first such admission by an EU institution, that the two pipelines are competitors.