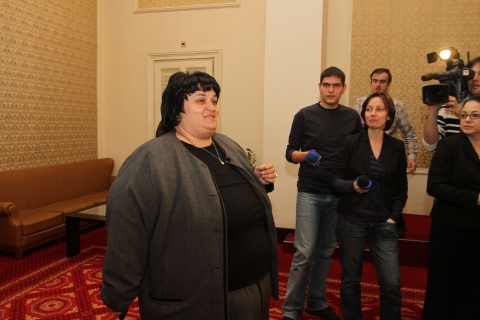 MP Iskra Fidosova (middle) has denied trying to influence the appointment of a head of the Lom customs. Photo by BGNES

The tapes were disclosed by the conservative Order, Law and Justice (RZS) party on Monday. The tapped phone conversations are said to reveal how the two key MPs from the ruling party GERB pressured Customs Agency head Tanov to appoint certain persons, which he believes to be outright criminals, to head local customs offices.

Speaking for the first time on Wednesday, both Fidosova and Stoyanova admitted to having had numerous and constant phone conversations with Tanov over their work but also said the tapes were forged, and denied accusations of trying to influence Tanov to appoint certain individuals at key positions. The Parliamentary Committee on tapping devices decided to start an investigation into the tapes and whether the conversations were tapped legally.

Fidosova said she did not feel guilty for talking to Tanov and asking him about how a certain candidate performed at an exam for the position of heading the customs office in the Danube town of Lom. She said she did not know the person in question.

"I am disgusted by all that is happening in Bulgaria in the past few days. Trust me, we are an inexplicable country. I am in constant touch with Vanyo Tanov, that is why it is very easy to forge a tape from our conversations," Menda Stoyanova said in turn. She refuted the conclusions from the tapes that she tried to influence the appointment of a new head of the customs office in Plovdiv.

Speaking on the Bulgarian National TV on Tuesday, Tanov did admit that GERB party members have tried to influence him for certain appointments by lobbying.

The Parliamentary Committee on tapping devices has decided to ask the Interior Ministry, the Prosecutor's Office, and State National Security Agency DANS if they ordered the tapping of the two MPs, Customs Agency head Tanov, Deputy PM and Finance Minister Simeon Djankov and his deputy Vladislav Goranov.

Meanwhile, the Sofia Prosecutor's Office denied having issued a permit for wiretapping the phone of Customs Agency head Vanyo Tanov.

The latest leaked tapes, whether fake or not, intensified even more the scandal triggered by three tapes of discrediting conversations between Tanov and his superiors – Finance Minister Simeon Dajnkov and Deputy Finance Minister Vladislav Goranov –  which were released at a news conference last Wednesday by the Galeria weekly, a paper believed to be the mouthpiece of Aleksei Petrov, former special agent of the State National Security Agency DANS, (currently under house arrest), who has been investigated on organized crime charges since his arrest in the much advertised "Operation Octopus" in February 2010.