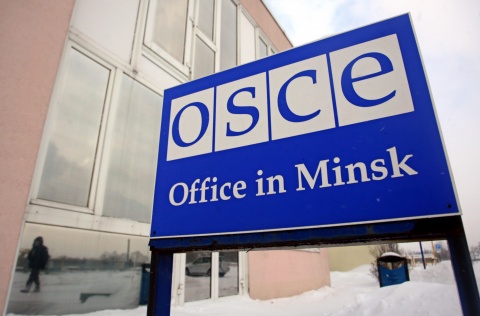 Belarus ordered the closure of the office of the Europe's top rights watchdog OSCE in Minsk on 31 December 2010. The OSCE has been sharply critical of the December re-election of Belarusian President Lukashenko. EPA/BGNES

The Sofia-based Committee for Free, Democratic, and Independent Belarus has expressed its readiness to serve as an embassy for the Balkan countries for the "government of national salvation" formed by the Belarusian opposition.

In an interview for Novinite.com (Sofia News Agency) Mikhail Vashkevich, a Belarusian dissident, writer and journalist living in exile in Bulgaria since 1996, and Boris Tashkov, head of the Committee, said they denounced the violence that the Belarusian regime used to disperse a 40 000 opposition rally in Minsk protesting the rigged elections on December 19, 2010, which gave the incumbent President Alexander Lukashenko a fourth term.

"We disseminate information from Bulgaria to try to help the democratization process in Belarus. We support the Belarusian opposition and Andrey Sannikov and the government of national salvation that he founded on the election night in December 2010, on the Independence Square in Minsk. We would like to be its representatives in Bulgaria and in the Balkans. We got in touch with the current opposition leaders in Belarus because we hold the same views," Vashkevich said.

The Belarusian presidential elections at the end of December 2010 were widely criticized by the EU, the USA, and the international community because of wide-spread rigging, fraud, and violence.

Vashkevich and Tashkov have urged the EU and NATO and their member states to take much more active measures against the Lukashenko regime in Belarus. They declared that Lukashenko relies explicitly on backing from Russian leadership in the Kremlin, and his regime cannot survive without Moscow's support.

Vashkevich fled to Bulgaria in 1996 after an attempt was made on his life in Minsk where he was the founder of the Christian-Democratic Union of Belarus in 1993. Back in the 1980s, Vashkevich spent 4 years in a Gulag labor camp in the Soviet Union for his dissenting publications on charges of ties with the "imperialist west."