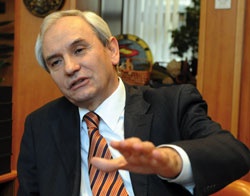 Serbian Minister of Energy and Mining Petar Skundric says that the government is not going to give up the participation in the construction of Belene nuclear power plant in Bulgaria. Photo by Sedam dana

Before Serbian pundits, Skundric has revealed that he is in favor of the project and has pointed out that a new Bulgarian nuclear plant will facilitate a decrease in Serbia's electricity prices.

"Serbia will benefit from taking part in Belene, since it will receive cheap and consistent energy," Skundric has stated.

He has added that he believes Belene can be built even without Serbia's participation.

In November, Bulgaria initially offered Serbia a share of 1-2%. Afterwards, Serbia was said to have asked for 5-10% of the plant.

On November 30, an agreement for Belene was signed in Sofia between the Russian State Corporation "Rosatom" and the Bulgarian National Electric Company (NEK) to establish a company to study the project. The Finish Fortum has a symbolic stake of 1% while the French Altran Technologies is expected to join the project.

According to the signed documents, Bulgaria will have 51% of the NPP, but other investors would later have the opportunity to increase their shares to 25% in the expense of the Russian and the Bulgarian ones.