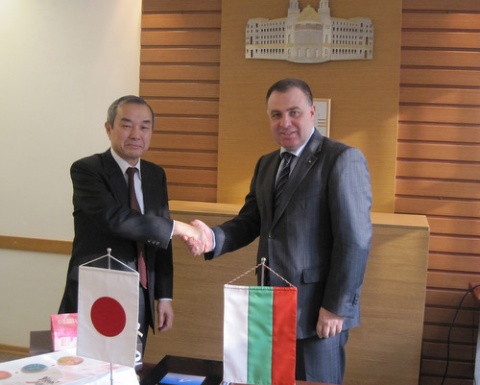 Japan is interested in expanding its imports of certain agricultural products from Bulgaria, according to Agriculture Minister Miroslav Naydenov, who met with the new Japanese Ambassador in Sofia.

Naydenov had a meeting Monday with His Excellency Makoto Ito, the new Ambassador of Japan to Bulgaria, which served to prepare arrangements for Naydenov's visit in Japan as part of a Bulgarian government delegation later in January.

According to the Bulgarian Ministry of Agriculture and Foods, while Naydenov pointed out that the Bulgarian yogurt is popular in Japan, and could serve as a platform to expand the bilateral cooperation with respect to trade with agricultural products.

Ambassador Ito is quoted as saying that in the recent years Japan imported most of its poultry from Brazil because of restrictions on imports from Asian nations, which created potential for imports from an European destination such as Bulgaria.

The two sides are said to have agreed that a potential start of exports of Bulgarian wine to Japan would enjoy good opportunities as Japan is already importing wines from France, Italy, Australia, Chile, the USA, South Africa.

Japan's Ambassador has pointed out Japanese businesses are aware of the fact that Bulgaria has some fallow agricultural land, and that they would be interested in investments in agricultural land property.