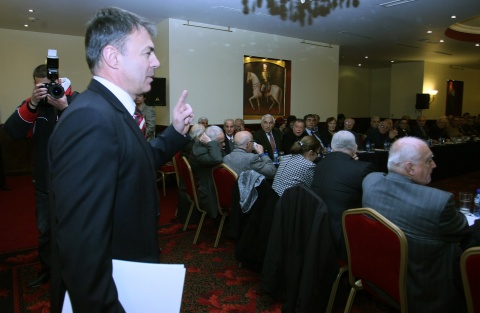 The Bulgarian Academy of Sciences will live on, Bulgaria's Education Minister Sergey Ignatov has declared.

This was announced after a scheduled meeting on Monday between the Academy, Education Minister Sergey Ignatov and Finance Minister Simeon Djankov.

It was also revealed that members of the Bulgarian Academy of Sciences will create a new consulting organ under the Council of Ministers.

"Nobody will destroy the Bulgarian Academy of Sciences. Relax," Sergey Ignatov said as a response to the increasing concern on behalf of the Academy that it might be shut down.

Ignatov was positive that none of the Academy's institutes will be transferred to the Bulgarian Ministries.

However, according to the new legislation on the Bulgarian Academy of Sciences, which is currently being prepared, the Academy's Institutes will be transferred to the Ministry of Education. Each Institute will now be funded separately.

At the end of 2010, BAS employees voiced deep discontent and staged several protest rallies over drastic cuts in their budget for 2011. They further opposed the new Bill, providing for BAS Institues to be opened and closed by the cabinet, under the proposal of the Education Minister, after coordination with the BAS President.

In 2009, Simeon Djankov insulted some of the Academy members, calling them "feudal grandpas", thus worsening the already existing conflict between BAS and the Bulgarian government over budget cuts.

Monday's meeting was scheduled by Ignatov in order to reconcile the two sides and discuss the Academy's future.