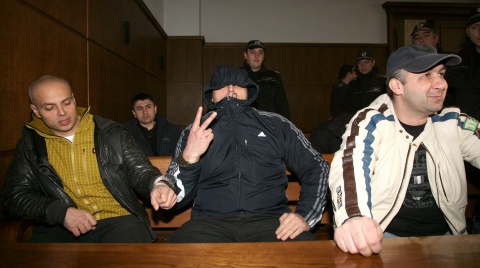 The suspected "Impudent" kidnap gangsters demonstrated Friday to the media that they are really impudent, as visible from the photo taken during the testimonies of three of their victims. Photo by BGNES

Three of the victims of the “Impudent” kidnappers gang, which is deemed responsible for at least 13 high-profile abductions in Bulgaria in 2008-2009, have revealed shocking details before the court with respect to their time in captivity.

The gang abducting people for ransom was shattered in December 2009, when some 25 people were arrested, in the “Impudent” special police operation.

One of the victims, Mihail Kraus, son of Bulgaria’s former Transport Minister Wilhelm Kraus, told the court on Friday that the kidnappers had a professional doctor cut off one of his fingers.

“Don’t worry, the surgery was done by a doctor,” the captors told Mihail Kraus after he had his finger chopped off as a punishment because his brother would offer a ransom of only BGN 50 000, much lower than the gangsters demanded.

“Your brother is messing with us,” is what the kidnappers told their victim. Before they removed one of his fingers on his right hand, they gave him pills that were supposed to dim the pain but he told the court he could still feel pain when he was having his finger cut off.

Kraus revealed he knows one of the suspects – Ivan Paynavelov, aka Sapata – but did not suspect him in any way.

During his time in captivity, which was over a month, Mihail was given four books that he read, including a book called “History of Martial Arts.”

“I don’t remember the others, I deleted them from my memory. I definitely wish to forget this entire story!,” Kraus stated.

He and the other victims interrogated by the court on Friday said they deliberated left hairs in the room where they were held in captivity.

A year later, after the Bulgarian police arrested the suspects and found the captive’s room, Mihail Kraus recognized it as the place where he was held locked.

Two other victims who were help in captivity for weeks by the Impudent kidnappers – Iliyan Tsanev and Rumen Guninski, the son of businessman Rumen Guninski, also testified before the court on Friday.

Rumen Guninski, a 23-year-old, student, unlike Kraus, said he was taken by the police to two locations but could not recognize the room where he was held captive.

He explained that after he was captured, he tried to delude his captors by claiming that that was not his name, and refuting that his father was close with Valentin Zlatev, the head of Lukoil Bulgaria.

Guninski said he still had scars from being handcuffed for a very long time. He failed to recognize any of the suspects in the room saying that, as in the other two cases, the gangsters were in masks and black clothes.

When Guninski was kidnapped, the abductors told him they were policemen, and that he was under arrest for drugs. He was threatened that, unless his father provides the demanded ransom, his finger will be cut off and mailed to his father.

The next hearing of the trial of the Impudent kidnappers will be held on January 17, 2010, when more witnesses will be interrogated.

The Bulgarian elite was terrorized for about 2 years by the kidnappers back in 2008-2009, who are believed to have made several million euro from the ransoms.