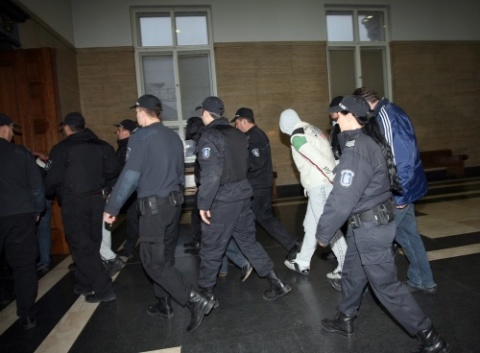 The trial against some of the alleged "Impudent" gang members, seen here escorted by the police, will go on on Friday. Photo by BGNES

The much awaited trial against 9 Bulgarians, who have allegedly participated in an organized gang for kidnapping high-level businessmen and their relatives, will continue on Friday.

Three of the kidnapped citizens - Iliyan Tsanev, Mihail Kraus and Rumen Guninski will be questioned in court.

The high-profile criminal case followed a special police operation entitled "The Impudent", cracking down on the alleged gang which has terrorized Bulgaria by kidnapping important businessmen and/or their relatives. The operation was carried out in Sofia and in the northern cities of Veliko Tarnovo and Montana.

A total of 27 people were detained by the police on December 18 2009.The special operation was conducted jointly by the Interior Ministry, the State National Security Agency DANS and the Prosecutor's Office. At the time, the Interior Ministry announced all had long rap sheets, including robberies and murders.

Among the 9 accused in the postponed trial, Ivaylo Evtimov and Prokopi Prokopiev are charged with racket and with organizing a kidnap gang.

Daniel Dimitrov, Lyubomir Dimitrov, brothers Radoslav and Mitko Lebeshevski, Pavel Petkov, Kiril Kirilov, and Tsvetozar Slavchev, are all charged as accomplices in a total of 11 high-profile abductions over the last years.

During the trial's last session, on December 22 2011, it was made clear that the alleged kidnappers will not have to return the ransom money to their victims.