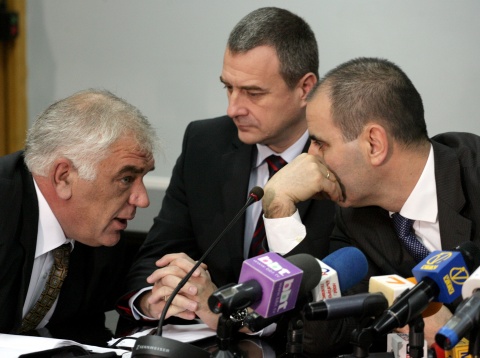 Bulgaria's two Deputy Prime Ministers – Finance Minister Djankov and Interior Minister Tsvetanov – are tangled in a savage conflict, according to tapes from May 2010 of phone conversations between senior Bulgarian officials.

Three tapes of conversations between Customs Agency head Gen. Vanyo Tanov with his superiors – Finance Minister Simeon Dajnkov and Deputy Finance Minister Vladislav Goranov – were releаsed at a news conference Wednesday by the Galeria weekly, a paper believed to be the mouthpiece of Aleksei Petrov, former special agent of the State National Security Agency DANS, who has been investigated on organized crime charges since his arrest in the much advertised "Operation Octopus" in February 2010.

The Galeria staff said they received the tapes through the mail on December 27, 2010.

The full transcripts of the tapes reveal a wide-ranging conflict between Finance Minister Simeon Djankov and Interior Minister Tsvetan Tsvetanov, as well as pressure on part of Tsvetanov on Customs Agency Director Vanyo Tanov, who complains that Tsvetanov and the Interior are pressing him and his staff not to check on potential abuses by certain large companies, and to focus instead on others.

Tanov also suggests that Tsvetanov is trying to fool Prime Minister Borisov with respect to certain matters such as the work of the Customs Agency on contraband.

"I don't even want to talk about it. There is no way everything can be so populist, so stupid, and so out of touch with reality... Total forgery! And he is misleading the prime minister. They are disgusting, they make me nauseous!," Tanov tells his boss Finance Minister Simeon Djankov, apparently referring to Interior Minister Tsvetanov and his staff.

Tanov complains to Djankov that Tsvetanov wants to appoint "his own people" at the Customs Agency, which is technically part of the Finance Ministry, which is why he lied to Prime Minister Borisov that Tanov's deputy and close aide Antoni Strandzhev met with former Interior Minister Rumen Petkov, who was part of the Stanishev Cabinet in 2005-2009 but resigned in 2008 over a scandal.

Tanov explicitly says that the Interior is pressuring him not to investigate certain companies. He mentions the hypermarket retail chain Billa with respect to fake excise bands and Lukoil with respect to fuel.

The head of the Customs Agency is furious and frustrated that the Interior Ministry manages to steal the achievement of his team since successful Customs operations are attributed to the police in news reports.

"I told you about the serious information about letting through cigarettes. Now the paper writes the opposite. That the Interior Ministry insisted that that person at Kulata (border crossing with Greece) be replaced, and that we were against that. Everything is turned around. So I want to know because I am a person who defends his name and image. I want to be able to walk freely and look people in the eyes. So either he [PM Borisov – editor's note] makes all this stop and makes them stop with these made up things, or I am getting out there and telling everything the way it is. This is it, I have not other way out. That is way I want to hear it from him [Borisov] because I have made certain commitments and I never give up and never betray the people," Tanov tells Djankov.

"If I betray one of my people... If you betray one of your team, the others will say, how can we do things... You know, there is no going against firms which have been known for years to have been under the protection of this and that person. How can I give my people courage and how can we continue to work from here on?," Tanov complains.

He says hypermarket chain Billa as well as all other companies have been detected with excise band violations and argues in favor of surprise checks by customs officers.

"Yes, but the prime minister is smart unlike him," Djankov tells Tanov directly meaning his colleague, the other Deputy PM Tsvetan Tsvetanov.

Tanov describes Tsvetanov as a populist who is ready to use all kinds of lies. He says the ruling GERB party is doing the exact abuses that it was fighting against before the elections. Tanov further mentions that he is aware that his phones are being tapped.

The other taped conversation between Deputy Finance Minister Vladislav Goranov and Vanyo Tanov happened at the initiative of Goranov who calls Tanov before the latter is about to go live on the bTV channel to convince him not to assault Tsvetanov on air for Tsvetanov's statements a day earlier that the Interior Ministry is about to inspect the customs as the Customs Agency has failed to do what people expect from it.

"It is is clear to everybody that Tsetso (i.e. Tsvetan Tsvenov) is talking without preparation, and that is not knowledgeable on this matter. Trust me, ever Boyko Borisov knows this," Goranov tells Tanov.

Goranov describes his boss, Finance Minister Simeon Djankov as an incompetent person who had lost all credibility with the prime minister, and is in a deep conflict with Interior Minister Tsvetanov.

"Keep in mind that he [Tsvetan Tsvetanov] and Simeon [Djankov] are neck to neck. You probably know that," he tells Tanov.

Tanov in turn is amazed at the actions of the Interior Ministry and those who attack his institution.

"Tanov: I am actually amused because the things that I learned in 1984 under Todor Zhivkov were probably better because now they act in such a simple way that...

Goranov: You say, they are very vulnerable...

Tanov: This doesn't matter at all... Time will go by... the question is... Because, you know, all kinds of reports, you write a report and you transpose you thoughts and wishes into that report, and then based on that report a political decision is made. Well, you can be slandered in any way. How do you defend yourself... this is this way, and at the same time it isn't this way.

Goranov: There is no other way, this is the high-level stupidity.

Goranov: There is no other. That is why I think this thing today was a provocation whose level...

Tanov: No, I am not going to answer this provocation in any way...

Goranov: You have your position. You can say that you realize that everything that happened in the customs for years is bad, and that the efforts you exert are to improve the situation. So if there is any criticism...

Tanov: I know it is worse, and I do everything possible. That is way I am having a 14-hour national council. But things cannot be changed by a magic stick.

Goranov: There you go, there is your answer for tomorrow.

Tanov: Mr. Goranov, they are not all angels in the Interior, in DANS, the same way they are not all devils in the customs. There are decent people here as well. The thing is to find the decent people and to change things with them. But these are people who have been ordered for 20 years not to do anything, not to dare to touch anybody. This one enjoys the protection of somebody, that one – of somebody else. You know, how they [the customs agents] look around and are afraid to do anything. By the time I make them feel that nobody will be able to influence them, and that the only thing they have to do is apply the law... How can you change this mentality? They fear to death because they know that out there there are firms and they know whose protection these firms enjoy, and cannot stop them. This thing instilled for 20 years cannot be changed in one, two, five months. I have prepared courses, each month, with young, new people. I bought a program product for psychoanalysis. I developed IQ tests in order to sift through them, to bring in new people, with new thinking, intelligent people. Carefully, little by little to change the staff because...

Goranov: I hope you will succeed because it will be very hard."

In the phone conversation, Goranov and Tanov talk about an old conflict between Tanov and Interior Minister Tsvetanov but at the same time Tanov explains that he and Tsvetanov had good working contacts before the 2007 elections when Tanov was elected mayor of Ruse.

Tanov also says back then, when Tsvetanov was the formal chair of the GERB party (as Borisov was Sofia Mayor and not allowed to hold the political position), he warned Tsvetanov that he (Tanov) had been a collaborator with DS, the State Security service of the former communist regime, which could lead to political attacks against GERB in the future, but Tsvetanov dismissed such an issue.

The tapes released Wednesday by the Galeria newspaper are believed to be authentic as during the news conference they were played to journalists and the voices of Tanov, Djankov, and Goranov were recognized.

In May 2010, information about a conflict between Tsvetanov and Tanov was actually reported by the media with claims that Tsvetanov wanted to oust Tanov from his post.

The Galeria weekly, believed to be tightly linked to former DANS secret agent Aleksei Petrov, aka the Tractor or the Octopus, has been vastly critical of Interior Minister Tsvetanov. At the same time, Tsvetanov has been the one who initiated the arrest of Aleksei Petrov. Petrov as well as the marginal conservative party RZS to which he expressed his preference have at various points accused Tsvetanov of misleading and lying to Prime Minister Borisov.

Borisov himself has reacted to the new spying and tapping scandal solely by commenting that his ministers are supposed to do their jobs, not to love one another, and by stressing that he is interested in specific results rather than in tapes.