PM on Discrediting Tapes: Bulgarian Ministers Don't Have to Love Each Other 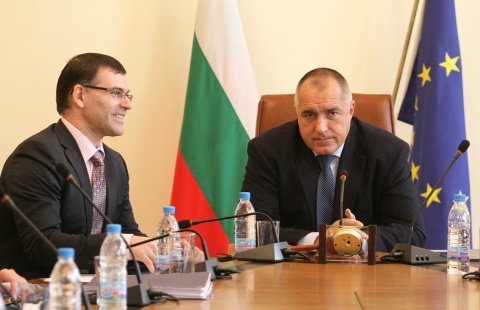 Bulgaria's PM Boyko Borisov (pictured here with Deputy PM and FinMin Simeon Djankov on January 5 at the Cabinet meeting) is not concerned with the released phone conversarions of high officials. Photo by BGNES

The Bulgarian Prime Minister Boyko Borisov is not disturbed by the released audio-tapes of personal phone conversations between several Bulgarian key officials, which expose deep conflicts and discrediting details about their relations.

"The Bulgarian Ministers are not chosen for their positions to love each other but to do their jobs," Borisov has stated before the Bulgarian media on Wednesday.

The editorial staff of Bulgaria's notorious tabloid "Galeria" released Wednesday audio-tapes of personal phone conversations between several Bulgarian key individuals in which they discuss each other's work. The authenticity of the tapes, as well as their origin, is yet to be established.

At a special press conference on Wednesday, the Bulgarian Galeria tabloid played three phone conversations – two between Finance Minister, Simeon Djankov, and the Director of the Custom's Agency, Vanyo Tanov, and one between Tanov and Djankov's Deputy, Vladislav Goranov.

In the first two, Djankov and Tanov discuss, in a highly critical manner, the actions of Interior Minister, Tsvetan Tsvetanov, without mentioning his name.

In the conversations between Djankov and Tsvetanov, the Customs Agency Head could be heart saying he "would resign if this non-sense does not stop."

Tanov further tells Djankov he had been pressured during Customs' probes to which the Finance Minister replies - "unlike him the Prime Minister is smart,' obviously referring to Tsvetanov.

In the third tape, between Tanov and Goranov, Tsvetanov is again the topic of the conversation along with Djankov. The Finance Minister is mentioned by name as someone who has lost the trust of Boyko Borisov, by both his activity and inactivity.

Borisov commented that he is more focused on the government's results than the phone conversations.

"I do not intend to waste my energy on what has been said in personal conversations," he said, pointing out that the Bulgarian Customs Agency has stopped 242 million cigarettes from smuggling into Bulgaria in 2010, in comparison to just 53.6 million in 2009.

"Bulgaria awaits some crucial months, in which a European Commission report is expected, as well a verification of the country's Schengen Agreement readiness," the Prime Minister stated.

He said, however, that it is important to found out where the conversations leaked from.

"If it is from the National Security Agency or the Prosecutor's Office, it will not be a good sign for either of them," Borisov told the media.