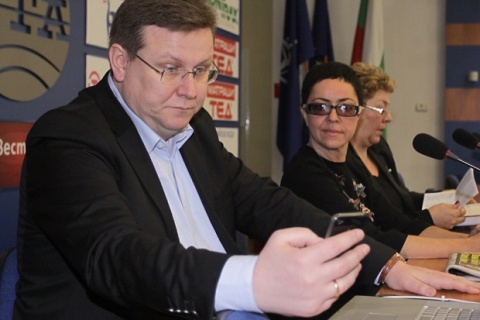 At a special press conference, the paper played three phone conversations – two between Finance Minister, Simeon Djankov, and the Director of the Custom's Agency, Vanyo Tanov, and one between Tanov and Djankov's Deputy, Vladislav Goranov.

In the first two, Djankov and Tanov discuss, in a highly critical manner, the actions of Interior Minister, Tsvetan Tsvetanov, without mentioning his name.

In the conversations between Djankov and Tsvetanov, the Customs Agency Head could be heart saying he “would resign if this non-sense does not stop.”

Tanov further tells Djankov he had been pressured during Customs’ probes to which the Finance Minister replies - “unlike him the Prime Minister is smart,’ obviously referring to Tsvetanov.

In the third tape, between Tanov and Goranov, Tsvetanov is again the topic of the conversation along with Djankov. The Finance Minister is mentioned by name as someone who has lost the trust of Prime Minister, Boyko Borisov, by both his activity and inactivity.

The "Galeria" editorial staff announced they have received the tapes by an anonymous source, and as of now, do not think they come from special surveillance devices.

The Deputy Editor-in-Chief of the tabloid, Yavor Dachkov, informed the tapes have been made last May, during the raging scandal between Tanov and Tsvetanov.

It is widely perceived that the Galeria paper is launched and serves the interest of former National Security (DANS) agent Alexei Petrov, who was arrested last February over allegations of leading organized crime group and who is currently under house arrest.

Meanwhile, also on Wednesday, the Bulgarian conservative Order, Law and Justice (RZS) party announced they are launching next week a national campaign, titled "Stop the Spying! You can!"

RZS say people in Bulgaria are victims of an unprecedented spying mania and claim they have copies of conversations taped to be used as a mean of political retribution.

The Conservatives further vow to release all tapes, after experts declare them authentic.

The campaign will involve large-scale protest rallies in Sofia and across the country.