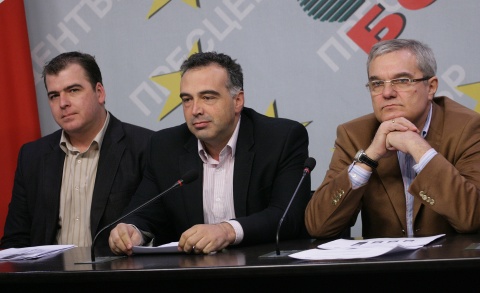 Ex-Interior Minister Petkov (right) at a news conference together with Anton Kutev (center) and Yavor Gechev (left) from the BSP leadership. Photo by BGNES

Petkov, the first Interior Minister in the 2005-2009 government of the three-way coalition led by the Bulgarian Socialist Party, resigned from his post on April 13, 2008, after a series of scandals sparked allegations of corruption and mafia connections in his department.

In November 2010, Petkov got tangled in a dispute with US Ambassador to Bulgaria James Warlick, as his non-immigrant visa to the US was annulled due to an alleged ongoing criminal investigation.

Bulgaria lost about BGN 1 B from the smuggling of cigarettes in 2010, Petkov said Tuesday at a news conference at the headquarters of the Bulgarian Socialist Party.

"This cannot happen without the collaboration of the state – the Interior Ministry, the Border Police, and the Customs Agency," he stated accusing the Borisov Cabinet – or at least some of its structures and aides of being involved in the cigarette contraband and other illegal activities.

The former Interior Minister did not cite the sources of his data but mentioned a statement of the French Interior Minister who allegedly said that two-thirds of the contraband goods in Western Europe went though Bulgaria incurring total losses amounting to EUR 1 B.

Petkov proposed the forming of a Bulgarian-Turkish Commission to inspect trucks crossing the common border.

"There have been trucks registered as bringing in cigarettes when passing through the Turkish border control, while the Bulgarian border control registered them as carrying plastic bags for Austria," he said.

He further claimed that in 2007-2008 when he was the Interior Minister he managed to block the cigarette contraband channels, which is why back then the EU had none of the complaints it has today with major Western European countries saying they are a threat to their security.

Petkov believes that Bulgaria's potential failure to join the Schengen Agreement in March 2011 will be the country's "first severe failure since 1990."

He said in 2007 the Stanishev government negotiated a total of EUR 240 M for Bulgaria's preparation to enter the Schengen Area, and insisted that Prime Minister Borisov should now answer the question "who stole this money."

He said EU experts had estimated that from mid November till mid December 2010 a total of 560 people, who had been banned from entering the EU, had entered Bulgaria.

"The cigarette smuggling channels in Bulgaria start to develop into human trafficking channels and the Bulgarian government is responsible for that," Petkov stated.

His news conference on Tuesday appears to be a follow-up of his recent accusations against Interior Minister Tsvetan Tsvetanov and Customs Agency head Vanyo Tanov for various issues.

Tsvetanov has in turn recently said Petkov was involved in the redistribution of the market of drugs and especially of amphetamines in Bulgaria.

Petkov's US visa scandal recently discredited his public image. At the same time, the specific occasion that led to his resignation – a meeting that he held in 2008 together with the infamous alleged mafia leaders known as the Galevi Brothers – has not still not been cleared. The scandal back then erupted when Petkov revealed he met with the two alleged mobsters as part of his police work and that he was accompanied by Aleksei Petrov – who at the time was a secret agent of the Bulgarian State National Security Agency DANS.

In February 2010, the Interior Ministry of the Borisov Cabinet staged a special operation codenamed Octopus in which Aleksei Petrov and a couple of dozen other people were arrested on organized crime charges. The investigation has dragged on since.