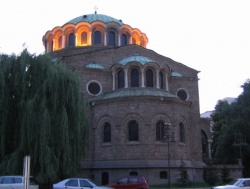 A solemn service will take place at 10:00 am at the "Sveta Nedelya" church. File photo

On December 27, the Turkish Military Commander Suleiman Pasha established his headquarters in Sofia. On January 3rd, with the Russian army approaching, the Turks began withdrawing from Sofia. Due to efforts of foreign consuls, the Turkish plan to burn the city down foiled.

On January 4th 1878, around 2:00 pm, the first Russian units entered the town. There was a solemn service in the "Sveta Nedelya" church in the presence of General Gurko himself.

Despite the fact that, at the time, Sofia was a way less significant Bulgarian center compared to Plovdiv, Ruse or Varna, after the Liberation the town was selected to become Bulgaria's capital.

As a tradition, on this day, Sofia City Hall express their respect and honor the Russian soldiers, who have perished during the offensive to liberate not only Sofia, but the country.

A solemn service will take place at 10:00 am at the "Sveta Nedelya" church - the very same one where, in the presence of General Gurko, the first service for the soldiers perished in battle was held.

The bells of all central Sofia churches will ring at 10:30 am. At 11:00 am, a wreath will be laid at the monument of the King Liberator, while the official celebration ceremony will begin at 11:30 am in front of the Volunteer Army Man monument in downtown Sofia.