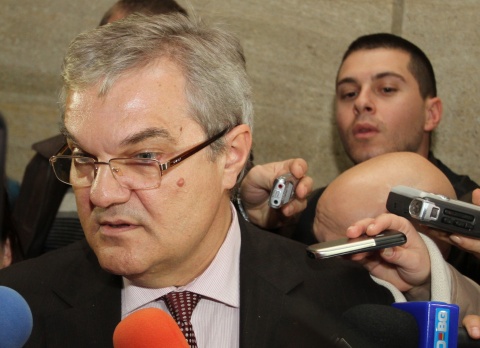 Bulgaria's former Interior Minister Rumen Petkov has claimed that Schengen funds have been stolen in Bulgaria. Photo by BGNES

A part of the funds intended for Bulgaria's preparation to join the Schengen agreement has been stolen, according to the controversial former Interior Minister Rumen Petkov.

Petkov pointed out that a total of EUR 160 M has been granted for Bulgaria in order to cover the Schengen criteria, of which EUR 30 M has been redistributed to the Ministry of Finance, where, in Petkov's opinion, the money has been used for other purposes.

"I am inclined to believe it has been stolen," Petkov said on Monday. He stated that no there is no political agenda behind some Western European states' reluctance on Bulgaria joining the border-free zone and emphasized on the country's failure to cover the technical criteria.

"There has been a huge increase in cigarette, fuel and drug smuggling through the Bulgarian border," the former Interior Minister stated and claimed that 560 people who are not allowed to enter the EU have crossed the country's borders in just a month.

On December 20, EP Vice President Rayner Wieland said in Sofia the decision on Bulgaria and Romania potential Schengen entry is to be made on March 27 2011.

Rumen Petkov resigned from his post as Interior Minister on April 13, 2008 after a series of scandals sparked allegations of corruption and mafia connections in his department.

In November 2010, his non-immigrant visa to the US was annulled due to an alleged ongoing criminal investigation.