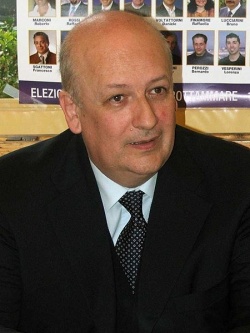 Sandro Bondi will be Michelle Bonev's next 'victim', according to Italian media. File photo

Italian Culture Minister Sando Bondi is about to resign in the next couple of days due to the scandal involving Bulgarian-born actress Michelle Bonev and other issues, according to Italian media.

Over 200 Italian MPs have signed a declaration wanting Bondi's ousting.

The turmoil involving Bulgarian born actress and director Michelle Bonev, was initiated by Italian media, which claimed that she received a "fabricated" award created just for her at the Venice Film Fest for her movie „Farewell to Mom". It was those reports which triggered the demands for Bondi's resignation.

Meanwhile, the historical House of the Gladiators collapsed at Pompeii on November 6. Outrage over the historical losses fueled the calls for Bondi's resignation.