Bulgaria Slow to Hand Over Renegade Serbian Priest to Macedonia 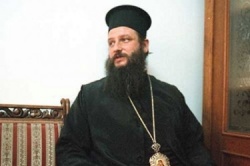 Detained Serbian priest Jovan Vranishovski, who was active in Macedonia.

Authorities in Macedonia have been requesting the extradition of orthodox priest Jovan Branisovski, who was arrested in Bulgaria mid-November based on an international police order.

According to Macedonian papers Vecer and Nova Makedonija, although the insistence on the Macedonian side has been firm, up to now Bulgarian authorities have not confirmed whether they intend to deliver Vranisovski.

The detainee's 40-days term of arrest expires Tuesday and it is not yet clear whether he'd be handed over, with Vecer commenting that Bulgarian authorities are acting "strategically."

Jovan Vranisovski has a 2.5-year sentence enacted against him in Macedonia, which is why he left the country.

Formerly, he acted as a cleric in Macedonia, but presented himself as the Exarch of the Serbian Orthodox Church in the country.

The problem is that the Macedonian Orthodox Church split from the Serbian in 1967 and is not recognized by it as a separate ecclessiastical entity.

The Serbian Orthodox Church regards the self-proclaimed Macedonian Church as schismatic and sees its territory as falling under its Ohrid Archbishopric.

This is why Jovan Vranishovski's activities were seen as encroaching in Macedonia, all the more that an Ohrid Archbishopric is not a registered religious entity in the country.

Vranishovski's actual 2.5-year sentence was nevertheless given for abuse with church money.