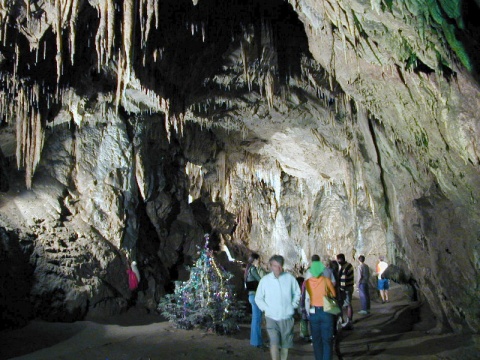 Tourists and speleologists have been increasingly enthusiastic about the Yagodinska Cave. Photo by pbase.com/ngruev

Cave-lovers from a tourist club called "Rodopeya" are going to welcome the new year in the Yagodinska Cave in Southern Bulgaria.

The Yagodinska Cave is located in the Rhodope Mountain; it is long 10 km and has three levels, of which the lowest one is equipped with electricity and fit for organized tourism with 1.1-km path, and special entrance tunnels.

The first level of the Yagodinska Cave is a valuable archaeological site as in the 4th millennium BC it was inhabited by pottery makers with had special ovens.

The cave is renowned for its unique forms and rocks with different colors; it features a permanent temperature of 6 degrees Celsius.

In the recent years, speleologists from the Rodopeya Club and tourists who arrive to the nearby villages of Yagodina and Buynovo hold New Year's celebrations inside the cave. A number of wedding ceremonies have also been held there recently.

The Yagodinska Cave is one of Bulgaria's "100 National Tourist Sites"; in 2010, it was visited by 51 000 tourists from Bulgaria and abroad.