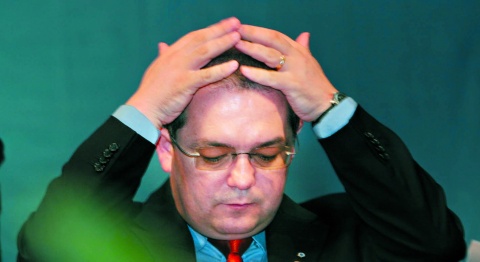 Romania's Prime Minister Emil Boc has expectedly survived a fourth no-confidence vote in 2010, while a man jumped from the balcony of the parliamentary chamber to protest Boc's economic policies.

The vote was called over an unpopular public wages act

The expected result allows Boc's fragile coalition to push ahead with unpopular austerity measures needed to keep a bailout package led by the International Monetary Fund on track.

A man identified as an employee of Romanian public television stood on the baloncy railing and jumped onto a bench below, just as Boc was just starting a speech to lawmakers.He was wearing a shirt bearing the slogan "You killed our future". Intervention teams provided first aid and removed him from the hall.

Upon jumping from the balcony, the man shouted "You took the bread away from the mouths of my children, you killed the future of our children". His life is reportedly not at risk.