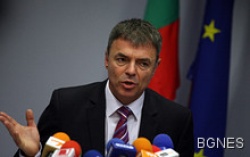 Bulgaria's Educational Minister Sergey Ignatov has been positive that the property will not be sold. Photo by BGNES

Bulgaria's Educational Minister Sergey Ignatov has confirmed that the German retailing chain Kaufland has an interest in purchasing certain real estate property of the Bulgarian Academy of Sciences.

"I can not comment Kaufland's investment interests, since I do not work there," Ignatov said. "But we have received a letter from the company, expressing their ambition to acquire the property of one of the Academy's Institutes, which we firmly opposed."

He clarified that the letter has been received on January 18 2010, adding that copies have been sent to the Finance Minister Simeon Djankov and the Academy itself. The prroperty in question belongs to the Institute of Metallurgy and Metal Sciences

The Educational Minister was positive that a deal like that would be completely impossible. "I do not now how they have come up with something like that," he told the Bulgarian media on Thursday.

Recently, members of the Bulgarian Academy of Sciences have alarmed that the government plans to shut it down and sell its property. A wave of protests erupted in the institution in November as a result of the government's drastic budget cuts for science and research.