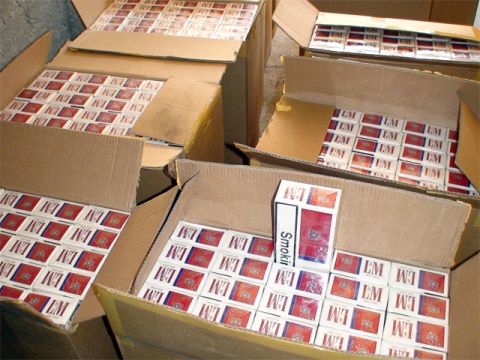 Bulgaria's customs detained five times more smuggled cigarettes in 2010 than they did in 2007, 2008, and 2009 combined. Photo by Customs Agency

Bulgaria's Customs Agency will raise a total of BGN 6,6 B in 2010 from VAT, excise and import duties, according to preliminary data released Wednesday.

If this forecast proves correct, the customs will meet 100% of their projected revenue for 2010, and will collect BGN 250 M more for the state budget than they did in 2009.

The 2010 revenue from excise taxes is estimated to be about BGN 3.6 B, and the revenue from customs duties will reach BGN 117 M.

After the refunds are subtracted, the total net income from excise on fuels amounts to BGN 1.794 B, which is actually BGN 43 M less than in 2009.

According to the preliminary data of the Customs Agency, there has been a substantial increase in the revenues collected from excise duties on alcohol.

At the same time, however, the revenues from excise on cigarettes and tobacco dropped by BGN 100 M in 2010.

While a total of BGN 1.788 B were raised from the cigarette excise in 2009, in 2010 the sum dropped to BGN 1.686 B, which according to the Customs Agency comes primarily from the reduced output of the two Bulgartabac plants in Sofia and Blagoevgrad, with the total amount of excise on their products dropped by 32%, or BGN 280 M.

In 2010, the Customs Agency refunded to companies a total of BGN 160 M for destroyed cigarettes with old stamps for which the tax was paid in 2008 and 2009.

The Customs Agency press service states that the institution's efforts are concentrated on fighting contraband and the evasion of excise duties.