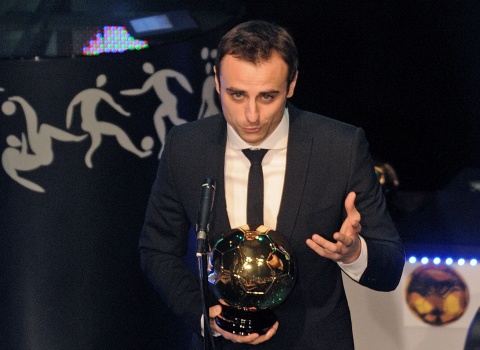 Berbatov has won the Bulgarian Football Player of the Year award for 4th consecutive year and seven times overall. Photo by BGNES

The star striker of Manchester United Dimitar Berbatov has won Bulgaria's "Football Player of the Year" award for the record seventh time.

Another Bulgarian striker, Ivelin Popov, a player of the Bulgarian team Litex Lovech, remained second, while the Bulgarian goalkeeper of the Dutch team Tvente Nikolay Mihaylov is third.

"I would like to thank all those who voted for me. One can never become fed up with success. It is essential that the youngsters understand that there is no great future without respecting your own past. I am glad that Bulgaria has had great football players. I am raising this glass to all of you," Berbatov told the Bulgarian media, football players and sports fans.

Legendary Bulgarian striker Hristo Stoichkov was among the VIP guests of the ceremony together with President Georgi Parvanov.

Stoichkov said that he owed all of his great successes to his mentors from the teenage years.

Before his controversial decision to back out of Bulgaria's national football team Berbatov scored a total of 48 goals in 77 matches, becoming the top scorer for Bulgaria of all time.

Berbatov's career started in the club of Pirin in the southwestern city Blagoevgrad. After that he joined CSKA Sofia. In 2006, he was bought by the German team Bayer Leverkusen for EUR 4.5 M.

Berbatov has already scored 38 goals in 104 matches for United. After somewhat inconvincing performance in 2008 and 2009 for United, in 2010 Berbatov appears to have finally lived up to his potential by becoming the top scorer in the English Premiership so far this season.

He also became the first foreigner and the fifth player overall to score five goals in a single match.