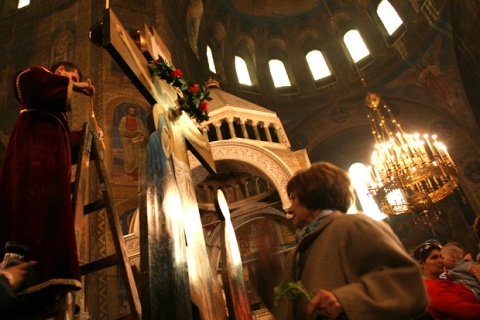 It was from this day to Christmas Eve that Virgin Mary's labours continued. Photo by Sofia Photo Agency

Orthodox Christians in Bulgaria mark on Monday Ignazhden, the day of St. Ignatius, which inaugurates all the Christmas and New Year festivities.

It was from this day to Christmas Eve that Virgin Mary's labours continued.

Some Bulgarians believe that the first person that visits their house on this day would indicate how the year would go. If a nice, warm, and smiling visitor arrives at their door, the year would bring them many happy moments.

Women should not take up any housework on that day, if they want to be able to conceive easily the following year and give birth to a healthy baby, traditions state.

Many ethnographers think that in ancient pagan times Christmas Eve and Ignazhden coincided, both celebrating God Kolada. The separation of the two holidays came after the Slavs were converted to Christianity.

Till the end of the 19th century, mainly in the villages, people used home-made candles for the church, which were used as charms against ill wishers.