Bulgarian Boy Performs with Andrea Bocelli at US Concerts 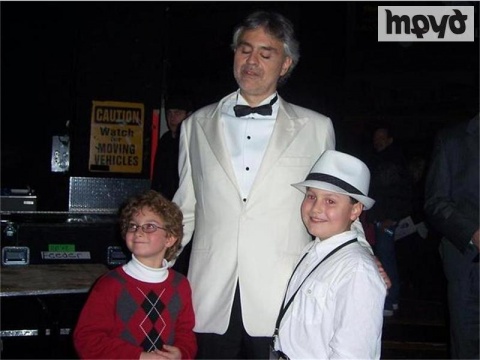 The 8-year-old Anthony Bulgari, who was part of a children opera group, sang together with Bocelli at two concerts – at Staples Center in Los Angeles and at MGM Grand Hotel & Casino in Las Vegas.

The small children choir joined the Italian tenor for the song "Mamma, son tanto felice," which exalted the audience in the crowded halls to tears.

About 200,000 people enjoyed the two Christmas concerts of the Italian singer in the United States.

"Bocelli radiates incredible energy. He patted me on the shoulder and I took it as a sign. I took a picture with him, he gave me an autograph and wrote me a Christmas wish that touched me very much," Anthony said, explaining that he sang with the Italian tenor a total of eight times because they had three rehearsals before each of the concerts.

This fall, the Bulgarian boy began studying music in an elite school in the Pacific Palisades district of Los Angeles. On his second day of classes, his teacher told him he was going to sing together with Bocelli.

"Exactly a year ago, Anthony and I were in the audience of Bocelli's Christmas concert in Las Vegas, where my son is born and where we used to live until three months ago," Anthony's monther, Ramona Dimcheva said.

She is a former Bulgarian cirque artist and she immigrated to the United States 20 years ago.

"After the concert, Anthony wanted to give flowers to the singer, but the security guard did not allow him. However, an usherette let us in and we met him and his producer. The funniest thing is that this year the same guard not only did not chase us, but rather had to protect Anthony," the mother said, adding that they later told Bocelli about this turn of fate "and he laughed a lot."

The little singer was in shock when he found out he had to wear a sweater at the performance.

"I cannot wear a sweater, I always wear a costume," Anthony said when he was told that he could not wear a white costume like Bocelli himself.

According to his mother, his talent comes from his grandfather because neither she, nor his father could sing.

"When he was 1,5 years old, Anthony himself showed us a DVD of Luciano Pavarotti's concert in Vienna. He refused to be told fairy tales and he began singing opera at the age of 3," Ramona said.

"The meetings with Bocelli were very emotional to me. At Christmas Eve, I wish that he could become my teacher and that I could make a duet with him," Anothony said.