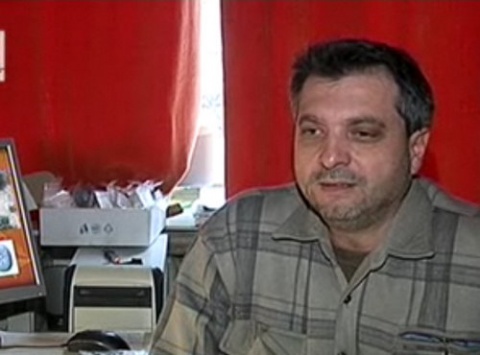 Archaeologist Ganetsovski might have found the world's oldest sun temple. Photo by BNT

Bulgarian archaeologist Georgi Ganetsovski has made a new hit discovering by unearthing what might be the world's oldest sun temple.

The team of Georgi Ganetsovski, an archaeologist from the Vratsa Regional History Museum, who specializes in paleolithic settlements, has uncovered a structure similar in function to the Stonehenge in the UK but is 3 000 years older than it.

The 8000-year-old structure has been found near the village of Ohoden, Vratsa District, Northwestern Bulgaria.

The ancient people used this sanctuary to track the movement of the sun in order to decide what is the best time for planting and harvesting their crops; furthermore, there they would offer gifts to the sun hoping for abundance of their harvests.

The floor of the sanctuary, which was uncovered from under tons of earth mass, was paved with cobblestones; the structure itself has the form of the Cyrillic letter "П", with its open end directed to the east.

"My research during the fall equinox and the measurements and tests that we made show that the shape of the structure is focused on the sunrise, and, what is more, taking into account the shifting of the magnetic poles of the Earth that occurred in the past 8000 years. Another interesting fact is that we found dozens of clay and stone discs at this spot," explained Ganetsovski as cited by the Bulgarian National TV.

In his words, in early agricultural societies the disc with a dot in the middle symbolized the sun disc, which indicates that the sanctuary is the oldest temple dedicated to the cult for the Sun god in Bulgaria, and possibly in the world.

Ganetsovski has recently presented his discovery at a prestigious archaeological forum in Romania with the participation of archaeologists from across the EU and the USA.

Ganetsovski has been excavating the site near Ohoden for years, which is believed to harbor important remains from the first agricultural communities in Europe; over the summer he found an 8000-year-old skeleton of a young man dubbed by the media "The First European."

In the summer of 2009, Ganetsovski spoke to Novinite.com (Sofia News Agency) and the Australian channel SBS TV about the troubles he had in dealing with raids by treasure hunters, who are a real plight for Bulgaria's archaeological heritage. He said that to avoid aggressive behavior on part of armed treasure hunters, he would let them search his sites because he knew that the paleolithic settlements had no metal, which is what the treasure hunters are after, and they would then leave him alone.