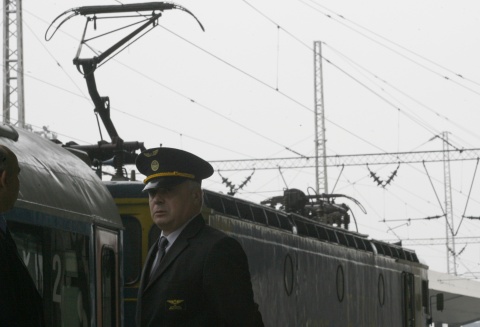 Thousands of Bulgarian railway workers will likely lose their jobs as the government has committed to reforms to get World Bank loans for the railways. Photo by BGNES

Bulgaria's Cabinet and the World Bank have singed a "memorandum of understanding" for reforms in the Bulgarian state railways company BDZ.

The exact sums of the loans that Bulgaria will get from the international financial institution have not been completely negotiated yet, announced Finance Minister and Deputy PM Simeon Djankov.

The memorandum signed Wednesday is a framework agreement which outlines the key reform priorities in the Bulgarian railway sector, and is an actual follow-up to a document entitled "Memorandum for Understanding and Intensification of Cooperation for the Development of Bulgaria's Infrastructure" signed over the summer by Bulgarian Prime Minister Boyko Borisov and World Bank President Robert Zoellick during Zoellick's visit to Sofia and Varna.

According to Transport Minister Alexander Tsvetkov, who took part in the signing of the memorandum together with Djankov, the talks for the World Bank loans for BDZ are to be finalized in the months to come.

Tsvetkov said the signing of the agreement with the World Bank is "a hope for stabilization" since the Bulgarian state railway company BDZ is in a dire financial situation at the moment.

In his words, the loan for reforms in BDZ, which is the state-owned operator of freight and passenger railway transport, will probably amount to about BGN 460 M, while the loan for the National Railway Infrastructure Company (NKZI), the state body managing the railroads, will add another BGN 140 M in a loan from the World Bank.

Tsvetkov said the Bulgarian government has sent a notification to the European Commission about its intention to provide state aid to the state railway companies, and expects the Commission to give a green light to the reform plan.

The reforms in the ailing Bulgarian state railways to be supported by the World Bank refer to a five-year reform period, which started in 2009.

The reforms yet to be carried out will emerge to be extremely painful causing thousands of layoffs, among other cuts, and have brought about the criticism by railroad syndicates who vowed to strike with determination to amend the deal with the World Bank.

According to Bulgaria's Transport Minister, however, the reforms have already started to bear fruit by reducing the year-on-year loss of the BDZ company by BGN 12-15 M in 2010.

"A very ambitious program is starting. These are hard reforms for the government, the state companies, their staff, and the Bulgarian citizens. Their goal is to provide good quality for all Bulgarian citizens for the money they pay for railway services. These reforms will improve the absorption of EU funds in the railway sector," declared Markus Repnik, World Bank Country Manager for Bulgaria.

The document signed Wednesday as a follow-up of the Borisov-Zoellick memorandum from the summer of 2010 is a commitment on part of the Bulgarian government to create a financially stable railway sector that meets the respective EU requirements by sticking to strict fiscal discipline in state spending in the railway field.

According to Finance Minister Simeon Djankov, the World Bank loans for the Bulgarian railways will be based on the principle "money for reforms", i.e. Bulgaria will be getting the money in tranches tied to its satisfactory reform progress.

One of the major conditions of the WB, however, is that a certain number of workers should be laid off to economize some spending over the next few years.

The Bulgarian Transport Ministry recently unveiled the idea to set up a security company of its own that Tsvetkov described as "BDZ Security" in order find alternative employment for those to be laid off. The exact parameters of the layoffs and other types of cuts in BDZ and NKZI are still unclear but BDZ is one of the largest state-owned employers.

The Bulgarian governments in the past 20 years have been unwilling to try to privatize the railways because of the strategic importance of the railway sector, and the concerns that a private owner would shut down unprofitable routes, and will lay off thousands of people.

Even though the company has seen very little investment over the past 20 years, and its speeds are slow, and many trains are in a bad condition, and it has also been reported to be used for draining state money by senior officials on a number of cases, it has been maintained by the government with subsidies and transfers from the state budget as a kind of a welfare state service to keep this means of public transport accessible and affordable.