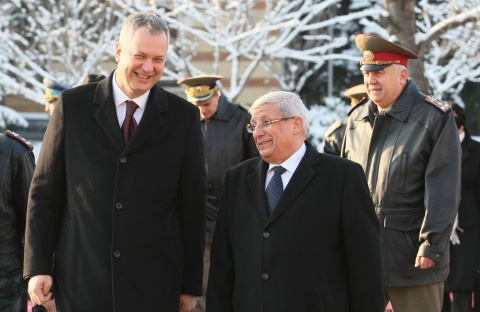 Serbia has expressed interest towards participating in the American-Bulgarian military trainings that take place on Bulgaria territory.

Serbia's Defense Minister, Dragan Sutanovac, who is on an official visit to Bulgaria Tuesday, discussed with his Bulgarian counterpart, Anyu Angelov, security and the bilateral cooperation in the region.

"Bulgaria has invited Serbia ti participate in the military trainings that take place in conjunction with the European command of the US forces at the Novo Selo training grounds," Angelov said.

The Novo Selo grounds, the airports in Bezmer and Graf Ignatievo are used jointly by the US and Bulgarian armies for training. Serbia might be the first other country to be included.

Sutanovac has stated that besides military trainings, Serbia is also interested in exchange of experience in military medicine and education.

He also said that there is a basis for bilateral cooperation in the defense industry. According to Angelov, there is a broad scope for action in this area.