Bulgarian Family Speaks About Having Been Tortured in Macedonia 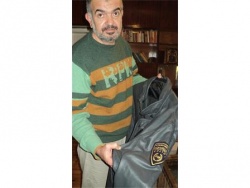 Zdravko Zdraveski shows his police jacket with bullet holes in it. Photo by 24 chasa

Zdravko Zdraveski, a former leader of the Macedonian 'Tigers' and 'Lions' special forces , has spoken to the Bulgarian '24 chasa' daily, stating that he and his family have been constantly terrorized by the authorities in Macedonia for declaring themselves to be Bulgarian.

Since being released from jail in Macedonia in September 2010, Zdraveski, 45, together with his wife Dobrila Zdraveska and their three children have lived in the Bulgarian town of Blagoevgrad.

"While I was in jail, the Macedonian authorities killed my brother and my wife's brother and disguised the murders as accidents," Zdraveski claimed before the Bulgarian media on Tuesday.

On Tuesday, a statement was made by Image Advertising, a Bulgarian PR agency, according to which Zdraveski amd his family have been under constant harassment by the authorities in the Republic of Macedonia because of their declaration to be ethnic Bulgarians.

According to the report, because of his self-determination as Bulgarian, in 2005, Zdraveski was fired from the Macedonian armed forces, and was stripped of his rank as captain.

In 2007, he is said to have been the victim of a fabricated trial on fraud charges and was jailed. Subsequently, the witnesses who testified against him reportedly renounced their testimonies saying they had been forced to make them.

Zdraveski's sentence was appealed and corrected by the Supreme Court in Macedonia but he still spent 2 years illegally in the Idrizovo jail in Skopje, and then in a prison in Prilep, up until 2010, and during that time he was constantly tortured and beaten. He is said to be keeping all the teeth that he lost during the jail beatings in a small bag.

"I was mercilessly beaten and tortured in jail. They frequently drugged me, because they did not want me to complain to my relatives. I still can not believe I am alive," Zdravevski stated in his interview on Tuesday.

"I am afraid that they will kill me and my family if we return to Macedonia," Zdraveski admitted.

He is said to be founders of the restored VMRO party in today's Macedonia. The VMRO party is the descendant of the Internal Macedonian-Adrianople Revolutionary Organization (VMORO), which at the beginning of the 20th century fought first to free Macedonia and Thrace from the Ottoman Empire and to unify these regions with Bulgaria.