Macedonian Authorities Said to Terrorize Family for Being Bulgarian 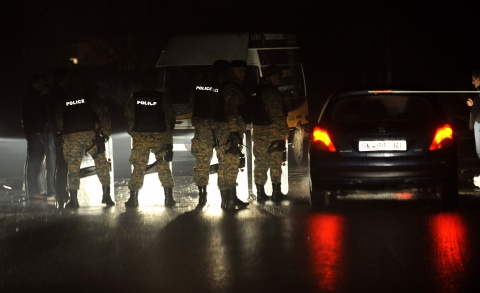 Zdravko Zdraveski, a former Macedonian policy, is said to have been tortured by Macedonia authorities for his Bulgarian self-determination. Photo by EPA/BGNES

The family of Zdravko Zdraveski from Prilep, Macedonia, has been constantly terrorized by the authorities in Macedonia for declaring themselves to be Bulgarian, according to a media statement calling for help.

Zdraveski, 45, his wife Dobrila Zdraveska and their three children have been under constant harassment by the authorities in the Republic of Macedonia because of their declaration to be ethnic Bulgarians, says the statement by Image Advertising, a PR agency based in the Bulgarian Black Sea city of Burgas.

The statement is rather untypical since it is has not been submitted by a client of the PR agency but by the agency itself, which has in effect issued a call for help asking anybody who could support the repressed family to do so.

After years of repressions in Macedonia, Zdraveski's family is reported to have been reduced to hunger and poverty and is now seeking refuge in Bulgaria.

Zdravko Zdraveski is said to be one of the founders of the restored VMRO party in today's Macedonia. The VMRO party is the descendant of the Internal Macedonian-Adrianople Revolutionary Organization (VMORO), which at the beginning of the 20th century fought first to free Macedonia and Thrace from the Ottoman Empire and to unify these regions with Bulgaria.

Zdraveski's wife is a granddaughter of the voivoda (a leader of an armed band of rebels) Georgi Stoyanov, who was killed in battle against the Ottoman forces in 1903 defending the so called Krushevo Republic declared by the rebels in the town of Krushevo during the 1903 Ilinden-Preobrazhenie Uprising organized the by the VMORO.

Zdraveski's family was first repressed by the authorities in 1994 for owning books and literature in Bulgarian language. The books were confiscated and Zdravko Zdraveski was thrown briefly in jail.

During the VMRO-DPMNE government in Macedonia of former PM Ljupco Georgievski in 1998-2002 – which is generally believed to have been friendly towards Bulgaria – Zdraveski served in he Macedonian police where he was in command of a rapid reaction force called "Lions". In 2001, he participated in the fight of the Macedonian police against the ethnic Albanian separatists in Western Macedonia. After the 2001 war he went on to serve in the special forces.

According to the report, because of his self-determination as Bulgarian, in 2005, Zdraveski was fired from the Macedonian armed forces, and was stripped of his rank as captain. In 2007, he is said to have been the victim of a fabricated trial on fraud charges and was jailed. Subsequently, the witnesses who testified against him renounced their testimonies saying they had been forced to make them, the Image Advertising report says.

Zdraveski's sentence was appealed and corrected by the Supreme Court in Macedonia but he still spent 2 years illegally in the Idrizovo jail in Skopje, and then in a prison in Prilep, up until 2010, and during that time he was constantly tortured and beaten. He is said to be keeping all the teeth that he lost during the jail beatings in a small bag.

The report says that Zdraveski developed an infection because of his wounds and barely survived as he was refused medical aid. All beatings and torture are said to have been designed to make him renounce his Bulgarian self-determination.

The head of the prison where he was jailed, a man named Dragan Penkov, is reported to have prevented Zdraveski from meeting with his family and with five lawyers who were made one after another to give up defending him.

The Image Advertising statement says that while Zdraveski was in jail, his brother and his brother-in-law were killed, and that the cases were reported as "household incidents" while the real murderers are free. One of these murderers is said to have been threaten the family of Zdraveski's older daughter that he will "finish them because they are Bulgarians."

Zdraveski's case has been brought to the attention of Spas Tashev, an advisor of the Bulgarian Diaspora Minister Bozhidar Dimitrov. Tashev met Zdraveski while the latter was still in the Prilep prison.

After Zdraveski was released from jail in September 2010, he came to Bulgaria together with his wife and three kids as the family feared for their lives.

At present, the family lives in the southwestern Bulgarian city of Blagoevgrad without employment and income. According to the Image Advertising agency, it has not received any support from the Bulgarian state or NGOs.

The agency stresses that Zdraveski's visa will expire on December 22, 2010, and he will be forced to got back to Macedonia together with his family where "there is a real threat for their physical liquidation."

The agency plans to stage a press conference with the participation of the Zdraveski family in order to "present to the public the fascist methods of repressions and genocide in the Republic of Macedonia" against those Macedonians declaring themselves to be Bulgarian.

"The case will be taken to the world and European human rights institutions – the UN, the European Court of Human Rights, the European Commission and the European Parliament. Letters will be sent to the diplomatic missions of the USA and the EU member states in Sofia regarding the genocide against the Bulgarians in Macedonia which has turned into a policy of this state," says the statement, which also provides a bank account for donations to be made to help the tortured family.

Reports of cases of harassment in Macedonia against Macedonians who declare themselves to be ethnic Bulgarian are not infrequent. Until the first half of the 20th century the majority of the population of the geographic region of Macedonia were considered to be ethnic Bulgarians. In 1944, communist Yugoslavia formally set up a Macedonian nation and made the so called region of "Vardar Macedonia" (as opposed to Aegean Macedonia which is a region in Greece and Pirin Macedonia which is a region in Bulgaria) one of the six Yugoslav republics.

After Macedonia (Macedonia) became independent in 1991, the Bulgarian authorities and public have protested vigorously against attempts by Macedonian officials and historians to "rewrite history" by proclaiming medieval and modern Bulgarian figures and events to be Macedonian, and against harassment of Slavic Macedonians who declare themselves to be Bulgarian.

Officially, the Bulgarian government has been seeking to improve its relations with the state of Macedonia but Slavic Macedonians (as opposed to the ethnic Albanian population in Macedonia) are widely seen as being part of the Bulgarian nation, at least historically.

These views have been translated in the official naturalization policy of the Bulgarian state, which is granting Bulgarian citizenship to increasing numbers of Macedonians based on proof of their Bulgarian origin, even such as Ottoman documents from the 19th century.

In 1991, Bulgaria became the first sovereign nation to recognize the independence of the Republic of Macedonia from the former Yugoslavia. In the late 1990s, Bulgaria and Macedonia worked out a compromise under which Bulgaria recognized Macedonia's right to call its constitutional language "Macedonian" even though it still considers it a dialect of Bulgarian.

The latest reactions in Skopje to a recent meeting between the foreign ministers of Bulgaria, Greece, and Serbia illustrates part of the picture of the Bulgarian-Macedonian relations today.