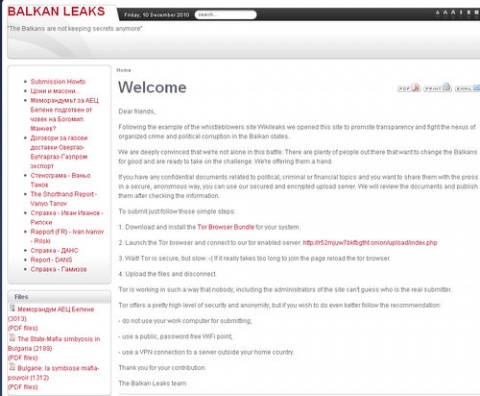 A new whistle-blower internet site has been launched in Bulgaria – Balkanleaks, an analogue, modeled after the notorious WikiLeaks.

The site has now published shorthand notes from meetings of Parliamentary committees, held behind closed doors, energy contracts, reports of the State Agency for National Security (DANS), and of the Unit for Combating Organized Crime (GDBOP).

The home page has a welcome message and directions for internet users how to submit information safely and securely. The site creators assure the information will be published in full confidentiality, and only after being verified.

"Following the example of the whistleblowers site Wikileaks we opened this site to promote transparency and fight the nexus of organized crime and political corruption in the Balkan states.

We are deeply convinced that we're not alone in this battle. There are plenty of people out there that want to change the Balkans for good and are ready to take on the challenge. We're offering them a hand.

If you have any confidential documents related to political, criminal or financial topics and you want to share them with the press in a secure, anonymous way, you can use our secured and encrypted upload server. We will review the documents and publish them after checking the information," the homepage reads.

The people behind the site are Bulgarian journalists, computer and IT experts, and freedom of press activists.

The frontman of the group is Atanas Chobanov. Chobanov holds a PhD in computational linguistics from Paris West University. He is a free-lance journalist, blogger and free-speech activist, currently involved in the project for investigative journalism www.bivol.bg

Chobanov tells Novinite.com he has accepted to be the Balkanleaks' spokesperson role over his long-term, strong commitment to freedom of press in Bulgaria. He was also the person behind the inclusion of this commitment in the program of Bulgaria's right-wing Blue Coalition.

Balkanleaks use the computer system TOR, which is very difficult to follow by the special services, the creators explain, saying if a particular document comes from an institution or even the special services themselves, it would be impossible to identify the sender.

TOR was the same technology used by WikiLeaks until the summer of 2010.

The Balkanleaks founders point out they have decided to launch this site because WikiLeaks have focused on their "war" with the US and someone needs to address local level scandals.

Balkanleaks have already published the memorandum for the construction of Bulgaria's second Nuclear Power Plant in the Danube town of Belene, the revelations of the former GDBOP head, Vanyo Tanov, about the meeting of former Interior Minister, Rumen Petkov with alleged crime bosses known as the Galevi brothers, the classified DANS report, submitted over a year ago by the notorious murky businessman and former DANS employee, Aleksei Petrov, to Prime Minister, Boyko Borisov, аlong with a very recent leak, just received through the TOR server.

The latest document shows that many influent bulgarian judges and attorneys are members of masonic lodges. "This is not illegal as long as the public interest sermon comes before the masonic one," Balkanleaks point out.