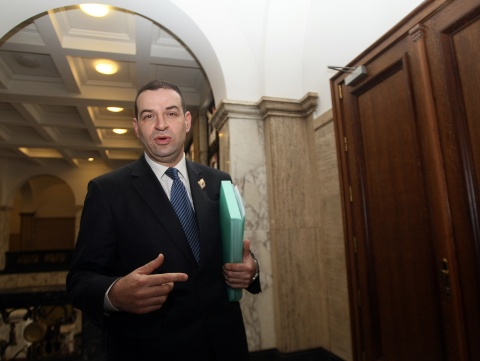 Former Prime Minister of Macedonia, Ljupco Georgievski, does not really have Bulgarian citizenship but has become the victim of a provocation by Bulgarian President Georgi Parvanov.

This unconfirmed revelation has been made by Nikolay Gatsev, an activist of the rightist Bulgarian party, Union of Democratic Forces, who is said to be close to ex Bulgarian Prime Minister Ivan Kostov. (Kostov, PM in 1997-2001, and former UDF head, is now the Co-Chair of the right Blue Coalition uniting the UDF and Kostov's party, Democrats for Strong Bulgaria.)

Gatsev has told the Macedonian TV channel A1 that Bulgarian President Georgi Parvanov, a former head of the Socialist Party, wanted to engineer trouble for Georgievski in Macedonia and started the rumor about Georgievski having a Bulgarian passport.

"Georgi Parvanov wanted to generate a media sensation in Macedonia, and he succeeded. This is a severe provocation and a violation of the Constitution," Gatsev told A1 urging the former Prime Minister of Macedonia to tell the truth about the fact that he does not have a Bulgarian passport.

Gatsev, who says he is close with Georgievski and deceased Macedonian President Boris Trajkovski, who perished in a plane crash, does not mention anything about the potential motives that Parvanov might have had to generate media trouble for Georgievski – provided that his revelations are true.

According to him, Georgievski, the found of the rightist VMRO-DPMNE party and PM of Macedonia in 1998-2002 (roughly the time Ivan Kostov was Prime Minister of Bulgaria) only has a Bulgarian identification number but no citizenship.

"The news about Georgievski has a Bulgarian passport is a huge manipulation in which Georgi Parvanov participated personally. As a lawyer, I urge Georgievski to tell the truth. It is time to reveal the truth about this case. Every foreign national staying for more than three months in Bulgaria has to registered with the authorities, and gets an ID card for a temporary stay. This includes a personal identification number (EGN). But this does not mean that they become a Bulgarian citizen," Gatsev stated.

In 2006, the news that former Macedonian Prime Minister Ljupco Georgievski got Bulgarian citizenship that he claimed on the basis of his Bulgarian origin – just as thousands of Macedonians do every year – fueled the claims of Bulgarian nationalists that Macedonian Slavs are ethnic Bulgarians. The news about the Bulgarian passport of Ljupco Georgievski was confirmed in 2006 by Bulgarian Vice-President Angel Marin back in 2006 in an interview for the 24 Chasa daily, which is still available on the website of the Bulgarian Presidency.

Georgievski's government is known for establishing close relations with Bulgaria, settling the so called language dispute, i.e. that Macedonian is a dialect of Bulgarian, and signing a military cooperation agreement with Sofia under which Macedonia got 150 heavy artillery pieces and 150 tanks. In 2001, after ethnic Albanian separatists staged a rebellion in northwest Macedonia, Georgievski signed the Ohrid Accords that helped stabilize the situation.

After Georgievski's time in power, Macedonia was ruled by the Social-Democrat government of former PM and President Branko Crvenski. Even though that Crvenkovski has been close with the Socialists in Sofia, the Macedonian Social-Democratic Union is seen by nationalist circles in Bulgaria as pro-Serbian.

VMRO-DPMNE was taken over by Macedonia's current PM Nikola Gruevski, with whom Georgievski had disagreements to the extent that he founded the VMRO-NP party.