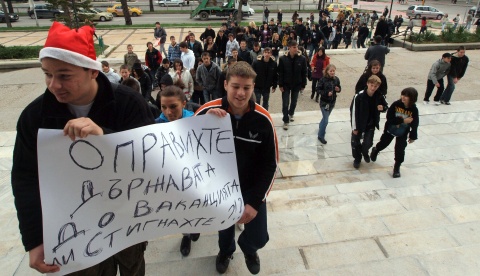 Students from the Bulgarian city of Varna have also protested for a longer winter break. Photo by BGNES

More than 1000 high school students from different schools in the Bulgarian city of Sliven gathered Wednesday for a peaceful protest that turned into a riot.

Sliven was another Bulgarian city, in which students have gone protesting for a longer winter break.

In addition to shouting "We want vacation" and "Strike," the students began throwing squibs, eggs and yogurt at the municipality building, where the Regional inspectorate on Education is located. The most aggressive students have been taken to the police station.

"They want to make up for cutting the winter break by adding one more day to the spring break. I do not agree with that," student Mihail Mitev told the Bulgarian private TV channel bTV, adding that there have been some coarse actions, but it was "not a big deal."

Although there have been attempts for prevention of the rally, the students from Sliven managed to get together and march around the central schools in the city.

The Wednesday rally was part of the national protest of students, who have planned to massively skip school on January 3.