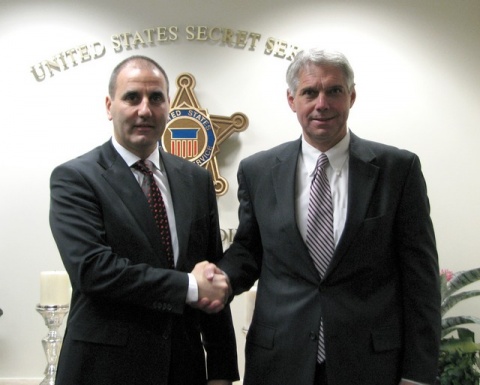 Bulgaria's Interior Minister, Tsvetan Tsvetanov, met with Mark Sullivan - Director of the US Secret Service (r) during his official trip to Washington. Photo by BGNES

Bulgaria's Interior Minister, Tsvetan Tsvetanov, held a series of high-power meetings in the US, where he received Washington's full support, the Interior Ministry press center informs.

Tsvetanov, who is on an official trip met with Eric Holder, Attorney General of the United States, with Robert Mueller Director of the United States Federal Bureau of Investigation (FBI), and with Howard Schmidt, White House Cyber Security Chief and Special Advisor to President, Barack Obama.

Holder gave high marks to the partnership between the law enforcement institutions of the two countries, pointing out problems with corruption and organized crime are common for Bulgaria and the US and form the basis of an even larger future collaboration.

Tsvetanov apprised the Attorney General with the amendments in the Penal Code and the plan to have special tribunals to deal with high-level organized crime cases. Holder stated the US is very interested in establishing such tribunals and would expect from Bulgaria to share its experience after they begin functioning in the country. He applauded the will of Bulgaria's cabinet to counter organized crime.

The two further discussed issues related to cyber security and computer crimes and reached an agreement to increase training by American experts of Bulgarian law enforcement officers in the US or locally to help them in fighting such crimes. Tsvetanov invited Holder to visit Bulgaria in 2011.

The FBI Director also congratulated Bulgaria's Interior Minister for his will and effort to halt corruption and organized crime, and received assurances this effort would continue while Bulgarian police are counting on the help of their EU and NATO partners.

Mueller pointed out the two countries must stress on exchange of information, increasing partnership, and expanding training of police officers.

Tsvetanov shared Bulgaria's intentions to become a regional center for analysis and investigation of cyber crime, including crimes of interest for FBI. The FBI Head received an invitation to visit Bulgaria as well. Mueller replied it would be a pleasure for him to make such trip because he had been last in Bulgaria 20 years ago when the two countries were in a very different stage of their relations.

Cyber security was also topping the agenda of the meeting between Tsvetanov and Howard Schmidt. The Bulgarian Interior Minister explained his institution had doubled the capacity of personnel involved in the investigation of computer crimes over the extreme importance of the issue while partnership with EU and US law enforcement has been excellent and improving constantly. Tsvetanov gave as example an FBI special agent working for two months with experts from Bulgaria's Unit for Combating Organized Crime (GDBOP).

Schmidt was also apprised with the idea of turning Bulgaria into a regional center for investigating cyber crimes. The White House Cyber Security Chief voiced full support for the plan, saying one of the reasons for Obama to create his own post was the threat posed by cyber crimes, both for national security and the economy.

The two reached an agreement to organize an international conference on cyber security for countries from Southeastern Europe, to be hosted by Bulgaria.