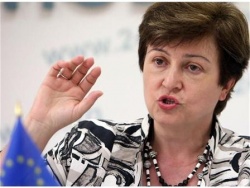 It is crucial for the European taxpayers to know how their money for crisis response is spent Bulgarian EU Commissioner Kristalina Georgieva stated on the Bulgarian National Radio Wednesday.

Commissioner Georgieva underlined that the citizens of EU are aware of the importance of crisis response and willing to support it actively, but in the same time, a more strict control over spending is deemed necessary.

"Eight out of ten Europeans support humanitarian aid, but ten out of ten want to know where their money goes to," she said.

Georgieva, who is the EU Commissioner for international cooperation, humanitarian aid and crisis response, spoke highly of the Bulgarian Civil Defense's fast reaction to the recent flooding across the country.

"I am impressed with the efforts put by Civil Defense. There is a good system for crisis reaction in Bulgaria, but it still has to be improved. A more serious control over humanitarian spending has to be implemented," Kristalina Georgieva stated.

She gave the example of Indonesia, a country previously reckoned as the most corrupt and problematic as far as receiving humanitarian aid goes, but which after the newly-implemented system, involving a stronger participation on behalf of small local authorities in the process has improved drastically.

Bulgaria has to deal with serious infrastructure issues in order to reduce the damages from natural disasters, she pointed out.