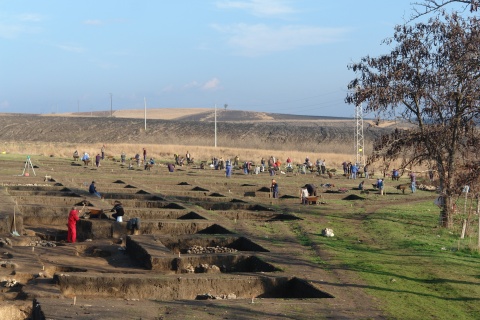 The newly-excavated Roman/Byzantine town discovered by Bulgarian archaeologists along the route of the Maritsa Highway is believed to be the town of Blisos, a major fortress where crusaders stopped on their way to Palestine. Photo by BGNES

Bulgarian archaeologists believe they have discovered Blismos, a major ancient and medieval town in the Roman, Byzantine, and First Bulgarian Empires.

A team of archaeologists led by Dimitar Yankov from the Stara Zagora Regional History Museum and Rumyana Koleva and Chavdar Kirilov from the Sofia University has been excavating several spots lying in the way of the Maritsa Highway, which is under construction.

The excavations have been funded by the Bulgarian Road Infrastructure Agency in order to clear the way for the Maritsa Highway going from the region near Plovdiv to Svilengrad on the border with Turkey.

The town discovered by the archaeologists is located near the village of Zlatna Livada ("Golden Meadow") in the Chirpan Municipality and is located on the major road from Constantinople to Philippopolis, the Greek name of today's Plovdiv.

The uncovered town existed for several centuries in the Late Antiquity and the Middle Ages. It has been described as being untypically big. The archaeologists have already found that it was at least 400 m in length, and are far from completing the digs. They have discovered that the town in question was densely populated, and that it had urban planning, whichs set it apart from the other towns from that period excavated on the territory of Bulgaria.

The artifacts and items found by the archaeologists have indicated luxury lifestyle on part of the town's Byzantine residents. The town processed iron and built weapons and instruments; it featured hi-tech ancient ceramics some of which was produced on the spot, while the rest was imported from around the Byzantine Empire. A lead cast for making seals has also been found, which indicates the presence of a senior representative of the Byzantine government.

The archaeologists believe the town have discovered is a major ancient and medieval town called Blismos. Sources from the 12th and 13th century state that the medieval town Blisos existed between Stara Zagora and Constantinople, and that knights from the Third (1189–1192) and Fourth Crusade (1202–1204) stayed in the town on their way to Palestine.

The Bulgarian archaeologists have found evidence of the presence of the crusaders on the spot back in the 12th and 13th centuries.