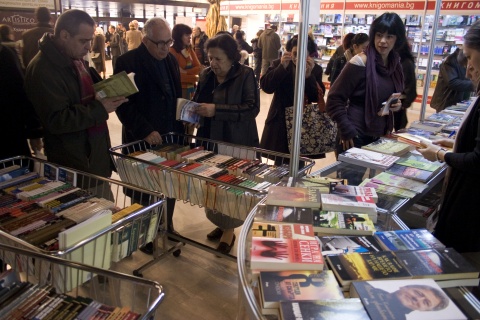 The Christmas book fair is one of the most anticipated events in Bulgaria's capital Sofia. Photo by Sofia Photo Agency

Sofia residents and visitors are in anticipation of the annual Sofia international book fair, opening Tuesday at 11:30 am at the National Palace of Culture.

The event, which closes on December 12, includes 50 book premieres, participation of over 100 publishing companies, and several concerts.

The admission is free. The fair is open until 8 pm daily. It will be launched by a jazz performance of the "Sofia" jazz band, followed by several other concerts including the free of charge symphonic one on December 11 at 7 pm at the Lumiere Hall of the National Palace of Culture.

Italian star singer, actor and winemaker Al Bano will be a special guest of the fair. Al Bano will visit the "Siela" stand - the company which published his autobiography. The actor will give autographs to fans on December 12.

The first event from the fair's program is held Monday evening at the Polish Culture Institute in Sofia under the patronage of Polish Ambassador to Bulgaria, Leszek Hensel. It is titled "Poetic Day of St. Nikolas" and is dedicated to two great poets – Bulgarian Nikolay Kanchev and Polish Zbigniew Herbert.

All of them will meet with fans, present their works and give autographs.

Bulgarian book premiers include the new poetry "The Ninth Home" of Maya Dalagacheva, the novel "King and Cowboy" of Marko Ganchev, the photo album of Ivan Kulekov, the drama collection of Georgi Danailov. Fans can meet at the Siela stand Bulgarian writers Alek Popov, Teodora Dimova, Zahary Karabashliev, Mihail Veshim and others.

On December 11, "Siela" is also organizing a discussion "Bulgarian books around the world; Bulgarian writers abroad" with Bulgarian and foreign participants including the French Cultural Attach?.

On December 9, the book store chain Helikon will announce the winner of their ninth annual award.